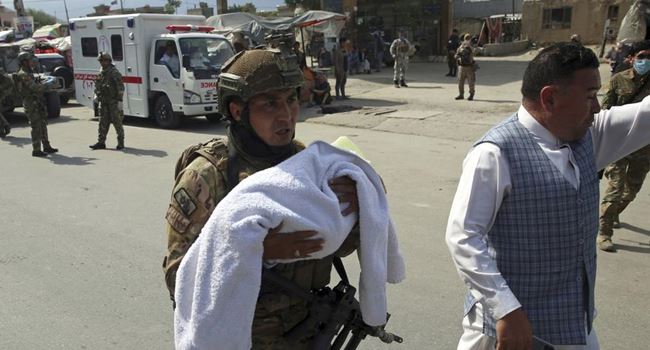 At least 16 people including mothers, nurses and two newborn babies have been killed by gunmen who raided a maternity hospital at the western province of the Afghan capital, Kabul on Tuesday.

According to reports from security officials, about three of the attackers had entered the hospital wearing police uniforms, throwing grenades and setting off long hours of shooting with the police, claiming 16 lives in the process.

An image showed a mother who had been killed, holding on tightly to her baby, who survived and has been moved to the intensive care unit of another hospital.

A deadly suicide bombing had also taken place that Tuesday at a funeral of a pro-government military Commander in the Eastern Nangarhar province of Afghanistan killing 24 and leaving 68 terribly injured.

The Taliban and ISIL (Islamic State of Iraq and the Levant) have both denied responsibility for the attacks.

Meanwhile, ISIL has said it was behind a Monday bombing in Kabul which killed 4 civilians and a child.

It is still unclear why the attackers had targeted the health facility (Doctors Without Borders clinic) in Kabul but the country’s Interior ministry spokesman, Tareq Arian and Rights group Amnesty International have condemned the attack as an “act against humanity and a war crime”.

“The unconscionable war crimes in Afghanistan today targeting a maternity hospital and a funeral, must awaken the world to the horrors civilians continue to face,” The Rights group tweeted.

There must be accountability for these grave crimes.”

The United Kingdom, Germany, Turkey and Pakistan have as well released statements condemning the killing.