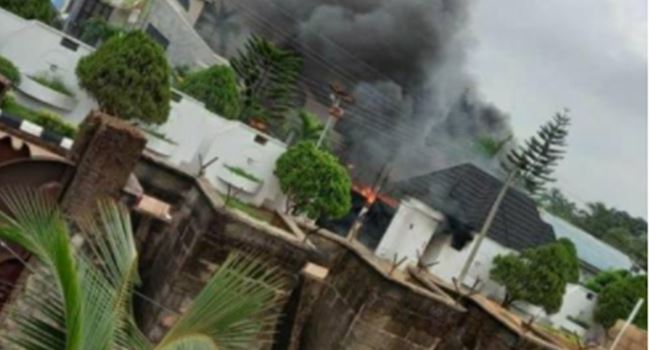 In a video which emerged online, the palatial building is seen burning, while people around the vicinity were running around to quell it, even as others were heard urging for anyone to call the fire service department.

A Coaster bus on the premiers was also seen burning.

Another video which emerged showed some men dressed in black entering the premises, as gunshots later rang out.

Ripples Nigeria has not been able to authenticate the video, as neither the state government, the police or fire service has reacted to the incident.

Recall that Governor Uzodinma only yesterday paid a visit to President Muhammadu Buhari, at the Aso Rock Villa, Abuja.

Speaking with newsmen after the meeting, Uzodinma blamed disgruntled and opposition politicians for the recent series of violence in his home state.

Uzodinma had also told reporters that the travails of President Muhammadu Buhari are due to terrorist sympathisers amongst politicians.

The burnt property of the governor is located at his hometown in Omuma, Orlu East local government area of the state.

Eyewitnesses reported that the crime was committed by suspected hoodlums in black attires.

Uzodinma and his colleagues from the South-East have been engaged in an ongoing feud with the Indigenous People of Biafra (IPOB) over the alleged marginalisation and injustice being meted on the Igbo people.

IPOB has however denied having any hand in the series of violence that has been visited on some states in the region of late.

Isa Ali Pantami – The pantomime within and my people of Habib