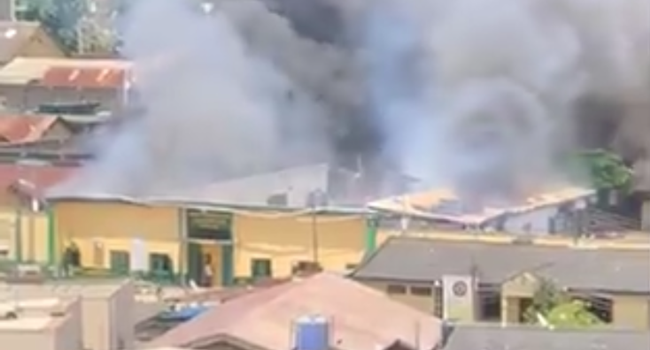 Gunshots and a fire outbreak have been reported from the Correctional Facility locates in Ikoyi Area of Lagos State.

However, it was learnt that security operatives had been deployed to the facility to help prison guards ensure efforts to free inmates at the centre were foiled.

Videos of the prison currently circulating on social media handles showed smoke at the prison facility with gunshots being fired.

Meanwhile, he said the fire though “ongoing” was under control as officers of the Federal Fire Service were making efforts to put it off.

He tweeted “Ongoing Fire Incident at the Ikoyi Custodial Centre (prison) is under Control.
Armed squad of the Nigeria Corrections, the Nigerian Security and Civil Defense Corps and officers of Federal Fire Service as well as @PoliceNG are on ground.”

UPDATE: Ongoing Fire Incident at the Ikoyi Custodial Centre (prison) is under Control.
Armed squad of the Nigeria Corrections, the Nigerian Security and Civil Defense Corps and officers of Federal Fire Service as well as @PoliceNG are on ground. pic.twitter.com/fYw0eyDwHt

Unverified reports on social media had claimed the prison came under attack by hoodlums.

Lagos has been under attack by hoodlums looting and setting fire on businesses since the shootings of some endSARS protesters on Tuesday night at the Lekki toll gate.

Related Topics:firegunshotsIkoyi Prisons
Up Next