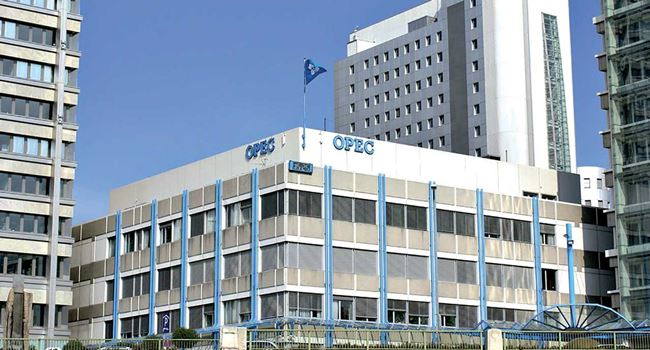 The Organisation of Petroleum Exporting Countries (OPEC) Thursday agreed to another cut in production adding up to 1 million barrels per day (bpd) among its fourteen members while anticipating Russia and its allies under the OPEC+ cartel to tow a similar path by bringing production down by half a million bpd.

The Saudi-led group is proposing the new measure to last through the second quarter of 2020 as a timely buffer to the crushing weight of the Covid 19 epidemic on global oil prices.

OPEC said the group would review the policy shift at its next meeting timed to hold 9th June.

However, OPEC’s production cut ambition of 1.5 million bpd is conditional on Russia’s approval.

Saudi has, before the new move, been pushing for the extension of the existing cuts of 2.1 million bpd, which expires this month, to the end of the year.

If the mooted cut succeeds, OPEC’s overall production cut will come to 3.6 million bpd making it the group’s biggest cut since 2008, when it reduced production by 4.2 million bpd in the aftermath of the global financial crisis.

Russia has not given its nod to the proposed cut and there are worries it may not. Moscow is said to favour an extension to the existing cut rather than a new measure to curb output.

The global oil market is now looking forward to a meeting between OPEC and OPEC+ on Friday.

Iranian oil minister, Bijan Zanganeh said after the OPEC meeting today that Iran, itself the world’s largest oil producer after Saudi Arabia, would remain exempt from the planned cut.

Oil prices reversed early gains and dipped further on Thursday with the Brent going slimmer by 34 cents or 0.66% to trade at $50.79 a barrel while the West Texas Intermediate (WTI) shed 0.4% to trade at $46.59, a negative shift experts say could have resulted from the pessimism that Russia would not support the deal tomorrow.

Nigeria’s 2020 budget is set at an oil benchmark of $57 per barrel but Zainab Ahmed, the Finance and Budget Planning Minister, said the budget might be reviewed in the light of the negative impact of the Coronavirus plague on oil revenue.

Government seeks to earn about 35% of its revenue this year from oil.

Speaking after the Federal Executive Council (FEC) meeting Wednesday, she said “I am glad to inform you that our oil production as of today is two million barrels per day and at times slightly higher. That in its self will be a cushioning effect for us in the current oil price.”

Unfortunately, Mrs Ahmed’s optimism seems to have taken a bashing from OPEC’s new resolve to cut output among its members and even if Russia fails to agree to the 500,000 bpd, it is probable that OPEC will proceed to cut its own production by a million bpd.

The development might put further strain on Nigeria’s fiscal ambition through oil this year.

Moody’s Investor Service had earlier warned the Nigerian Government of external vulnerabilities stemming from over-reliance on oil revenue and advised that buffers be put in place to cushion the effects of shocks from the volatile global oil markets.