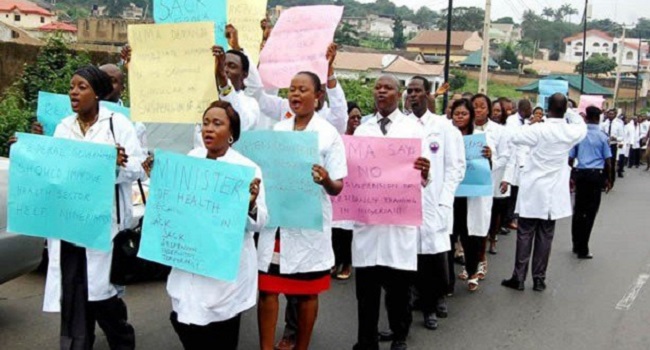 The union which gave the government until the last day of January to fulfil its demands has now issued a seven-day ultimatum.

National chairman of JOHESU, Mr Josiah Biobelemoye, said the workers had resolved to seek divine intervention to their plights while they coincidentally met the Minister for Health, Prof Isaac Adewole, on one of the occasions they visited a religious house.

He said, “We decided to seek God’s intervention by reporting our offenders to him. Last Friday we attended the Juma’at Prayers while on Sunday we attended Church Service.

“Fortunately and unfortunately, we met the Minister of Health in the church where we worship and the Overseer told him that he is in a better position to resolve this matter and allow the populace to receive better health.

“We decided to give the seven days ultimatum after which we will report to the NLC that decided to take over the matter. “

Speaking on the demands of the health workers, , the NLC President, Mr Ayuba Waba, urged the minister fof health to respect the collective agreement reached with the union in line with the National Industrial Court judgment that stipulates that no health worker should be denied of skipping, arrears and salary adjustment, among others.

Islamic cleric, 3 others arrested for being in possession of a human skull