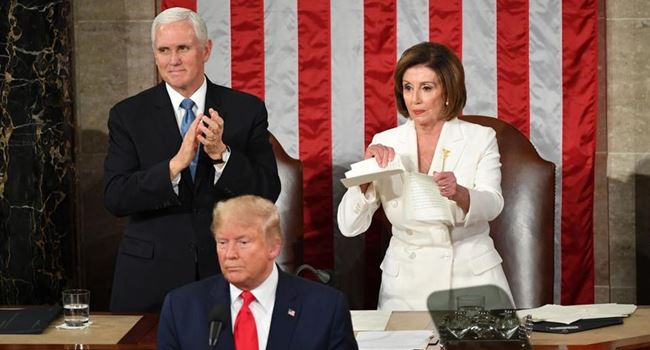 The heat that followed the failed impeachment of the President of the United States of America, Donald Trump, by Democrats is now being directed at House Speaker Nancy Pelosi.

Reports say House Republicans now plan to introduce a disapproval resolution condemning Pelosi for ripping up her copy of President Trump’s State of the Union speech.

A vote related to the resolution is expected in the House on Thursday, according to House Majority Leader Steny Hoyer’s office, though the measure — a privileged resolution under the House rules

The move comes after Trump survived an impeachment scare that threatened his administration after he was let off the hook when, US Senators declared on Wednesday that he was not guilty of abuse of power.

Reports say the vote was 52-48 with Senator Mitt Romney entering the history books as the first senator in US history to vote to convict a president from the same party in an impeachment trial.

The vote on the second article, obstruction of justice, against Trump was along party lines, 53-47 as Democrats failed in their bid to get him (Trump) out of office and impeached at the House.

The Trump campaign said in a statement: “President Trump has been totally vindicated and it’s now time to get back to the business of the American people.

“The do-nothing Democrats know they can’t beat him, so they had to impeach him.”

Trump will now get on with his term as the third US President to be impeached by the House of Representatives and not removed by the Senate.