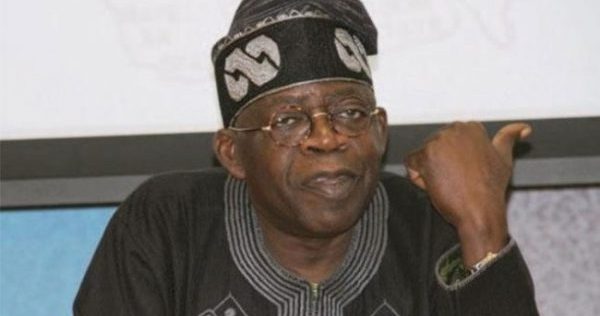 The tables seem to have turned, and the heat is now on a national leader of the All Progressives Congress (APC) and a former governor of Lagos State, Asiwaju Bola Ahmed Tinubu.
A coalition of 25 ethnic groups who claim to be active members of the APC, under the aegis APC National Vanguard, on Sunday said it had uncovered fifth columnists working for the opposition Peoples Democratic Party (PDP) for the 2019 general elections.

The organisation said that although the key actors were not interested in joining PDP for now, there is a grand plot to cause crisis that would lead to the disintegration of APC.

It alleges that among those behind the new scheme is Tinubu who is also said to be championing the division of the APC.

Recall that Tinubu had only recently written a letter to President Buhari in which the former governor alleged that the national chairman of the ruling APC, Chief John Odigie-Oyegun was sabotaging his (Tinubu’s) efforts at reconciling aggrieved members of the party.

There were protests from party members recently calling for the resignation and probe of Odigie-Oyegun, a call earlier made by Tinubu himself after the outcome of the party’s governorship convention held in Ondo State.
The position of APC-NV was contained in a communique issued after its emergency meeting held in Abuja said to have been attended by  over 100 participants.

They wondered why a key actor in Nigerian politics in the calibre of Tinubu would embark on an ambiguous adventure to destroy the house he built.

According to them, the recent letter by Tinubu to President Buhari in which he laid some accusations against Odigie-Oyegun were least expected of a nationalist and elder statesman like him.

The APC-NV said all that could be deduced from his letter to President Buhari, was that “Tinubu is acting out a pre-planned agenda to sack Chief John Odigie-Oyegun as APC National Chairman before the forthcoming national convention of the party scheduled for June 2018.”

“With the successful removal of the party Chairman, President Buhari’s re- election bid may be put in jeopardy. Reliable sources in Tinubu’s political camp have confirmed to us that there is a plot by a faction of the PDP and Asiwaju to create chaos and discord within the APC”, the APC-NV stated.

Part of the communique reads: “Politics should be played without bitterness, envy and acrimony, recent events in our party, APC have proved the contrary. It is surprising that our great party is being thrown into further crisis by those who should protect our interest and ensure unity because a house divided against itself cannot stand.

“Otherwise, why would somebody entrusted with the mission of reconciling aggrieved parties to pave way for APC national convention be throwing stones in a glass house? Our independent investigations have revealed that Tinubu is working for the opposition parties and PDP to cause crisis that would lead to the sudden death of APC.

“We have it on good authority that some PDP members have scheduled a meeting with Tinubu next week in the United Kingdom. We commend the maturity of Odigie-Oyegun and his response.

“After President Buhari entrusted with the assignment of reconciling members of APC, we would have expected that Asiwaju Bola Ahmed Tinubu would go about the task with tact and humility.

“But to the contrary, the first thing he did was to create more discord within the party by going after constituted authority of the APC.

“The question to ask is : from where does Asiwaju derive his authority? In whose interest is he creating crisis? Does the task of reconciling aggrieved party members convey any authority on him to attempt to discredit the party chairman in public domain? We believe the evil people among us won’t go unpunished”, the communique stated.

A text message to Tunde Rahman, Tinubu’s media aide, on Sunday night to get his principal’s reaction to the new development went unanswered at the time of going to press.