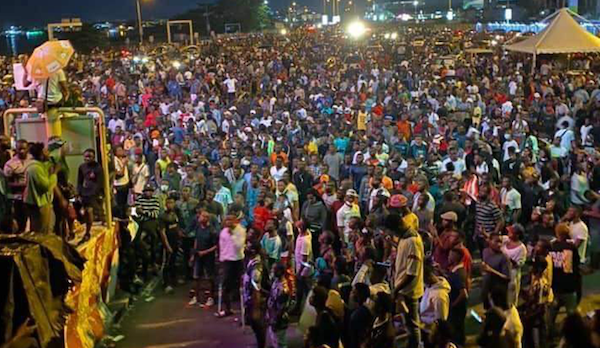 Soldiers on Tuesday opened fire on #EndSARS protesters in the Lekki area of the state on Tuesday.

At least one person has been killed and several others injured in the heavy bombardment by the soldiers.

An eyewitness told journalists that the protesters were sitting on the floor when the soldiers arrived in the area and started shooting sporadically.

The incident caused pandemonium in the area as protesters scampered to safety.

Lagos has been rocked by violence in the last few hours.

Earlier on Tuesday, at least seven persons were killed and several others injured during a clash between protesting youths and policemen from the Olosan police station in the Mushin area of Lagos.

The injured victims are receiving treatment at the General Hospital in the area.

Related Topics:ENDSARS protesters
Up Next

Atiku charges Buhari to address Nigerians, cautions him against use of force on #EndSARS protesters