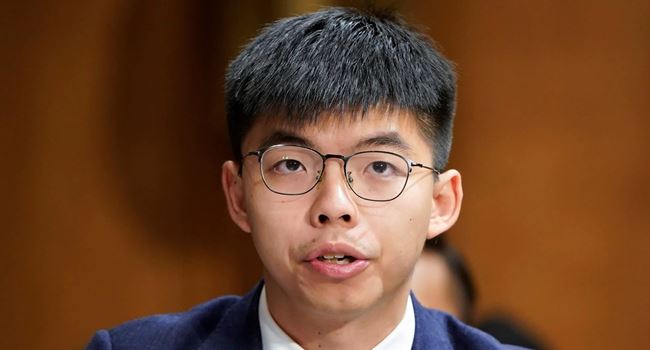 One of Hong Kong’s most prominent democracy campaigners, Joshua Wong has vowed to fight on after he was banned alongside 11 other opposition figures from running in the upcoming legislative elections.

Wong who made the vow on Friday said the pro-democracy camp would continue their fight for freedom after officials disqualified some pro-democracy candidates from running in September’s legislative elections and local media reported the poll could be postponed.

The activist while addressing newsmen said that Hong Kong’s new national security was a weapon used against dissidents while also condemning the disqualification of pro-democracy candidates.

Wong, who was dressed in a black T-shirt emblazoned with the words; “You can’t kill us all”, told the media that Hong Kong’s new national security was a “legal weapon used against dissidents” and the disqualification of pro-democracy candidates the most “scandalous election fraud in Hong Kong history”.

“Our resistance will continue,” he added.

The government of Hong Kong in a statement on Thursday said that electoral authorities had disqualified the 12 nominees for failing to demonstrate their intent to support and promote the territory’s mini-constitution, or Basic Law.

The statement added that advocating for independence, soliciting intervention by foreign governments, or “expressing an objection in principle” to a national security law that China imposed on Hong Kong earlier this month are behaviours that “could not genuinely” uphold the Basic Law.

The government also supported and agreed with the decision and warned more nominees could face a similar fate in the near term, in a move which has been decried as the latest assault on China’s critics in the semi-autonomous city.