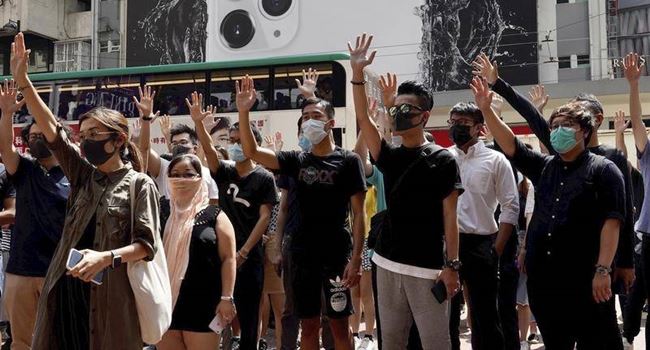 The streets of Hong Kong have been flooded with scores of protesters rallying against a move by the leader of the semi-autonomous city, Carrie Lam to ban the use of facial masks during demonstrations.

Reports say scores of protesters gathered at the city centre and several neighbourhoods to express their opposition over the proposed new ban on wearing masks during rallies.

Further findings revealed that Lam is set to bypass the city’s legislature in her bid to impose the use of colonial-era emergency laws to ban the use of face masks as violent protests continue.

“As a responsible government, we have a duty to use all available means,” Lam said. “The decision to invoke the ordinance a difficult, but also necessary, one for public interest.”

The ban is however, subject to vetting by the legislature when it reconvenes in less than two weeks.

Recall that violent protests in Hong Kong were sparked by a now-scrapped plan to allow extraditions to the mainland.