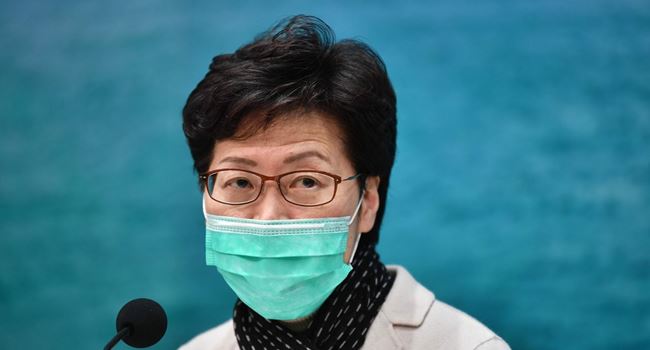 The chief executive of Hong Kong, Carrie Lam has slammed President Donald Trump for moving to strip the city of its special status in a bid to punish China for imposing national security laws on the semi-autonomous nation.

Lam who made the comments on Tuesday, also accused the United States of “double standards” in its response to violent protests and looting in the US amid widespread anger over the death of George Floyd, an unarmed Black man who died in police custody last week.

“There are riots in the US – we are seeing how local governments are reacting. When we had similar riots in Hong Kong, we saw what position they adopted then.”

Lam said the move by Trump to strip it of its special status to spite China would be self-defeating and took aim at the Trump administration for its own response to the racial justice protests sweeping the US.

“Foreign governments are criticising over government,” she said. “Some have threatened action and I can only say they are adopting double standards.”

“Now, about the so-called sanctions or removing Hong Kong’s special status, these acts will only hurt themselves and do not benefit anyone.”

Days ago, Hong Kong’s Security minister, John Lee, told reporters after Trump said the city no longer warranted economic privileges, that Hong Kong could not be threatened and would push ahead with the new laws imposed by China.

“I don’t think they will succeed in using any means to threaten the [Hong Kong] government, because we believe what we are doing is right,” Lee said.