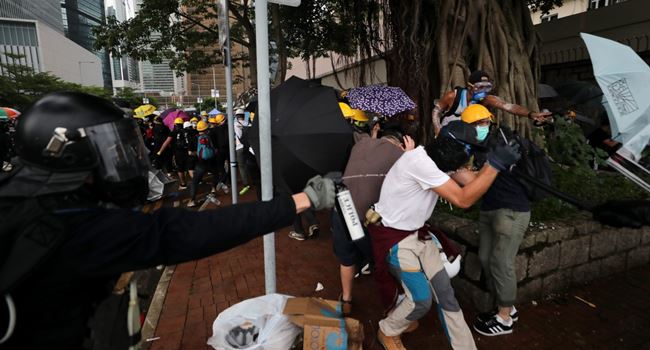 Thousands of protesters in Hong Kong are expected to return to the streets in defiance of a police ban, and march in a small rural town where suspected gang members assaulted pro-democracy protesters and passersby seven days ago.

Recall that the police in Hong Kong had placed a ban on public protests after the attack of a victim identified as Yuen Long on Sunday night by a mob of white-clad, rod-wielding men who left at least 45 people, including members of the media, wounded.

Dubbed Take Back Yuen Long, Saturday’s rally is taking aim at “terrorism”, according to Max Chung, who applied to police on Tuesday for the march in the northern town to take place.

However, the police on Thursday issued a letter of objection for the rally, citing concerns for public safety and order.

“The march is triggered by the violent incidents last Sunday and protesters have showed hostility towards some Yuen Long residents,” said Anthony Tsang Ching-fo, acting New Territories North regional commander on Thursday, according to the South China Morning Post.

“There is a fairly high chance for both sides to clash.”

The latest demonstration follows unrest over a now-suspended extradition bill that would allow criminals to be sent to mainland China for trial.

Reports say protests are spreading into deeper pockets of the territory and has now reached more remote communities in Hong Kong.