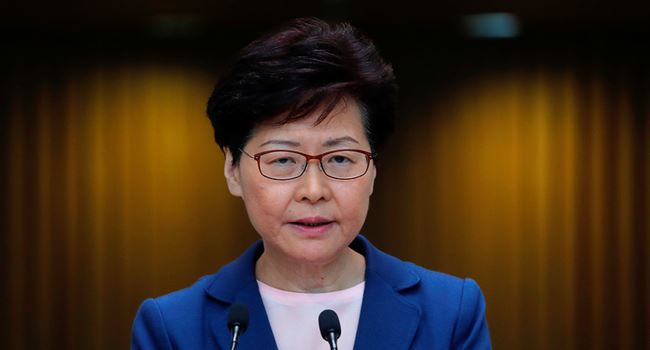 Embattled Chief Executive of Hong Kong, Carrie Lam is set to expunge the controversial extradition bill which has sparked unending protests in the semi-autonomous city.

Reports citing unnamed sources, in the South China Morning Post and HK01 revealed that the Beijing-backed chief executive was planning to announce later on Wednesday the scrapping of the bill.

“A government source said that Lam will emphasise that the removal of the bill was to streamline the legislative agenda, with the Legislative Council set to reopen in October after its summer break and hence it was a technical procedure,” the South China Morning Post wrote.

The move to scrap the bill is one of the main demands of the pro-democracy movement in the semi-autonomous Chinese territory.

The report comes a day after Lam apologised for sparking prolonged political crisis and admitted that she would quit if she had the chance.

Lam who revealed that much in an audio recording obtained by Reuters news agency also told a closed-door meeting with business people last week that she had “very limited” room to resolve the crisis because the unrest had become a threat to national security.