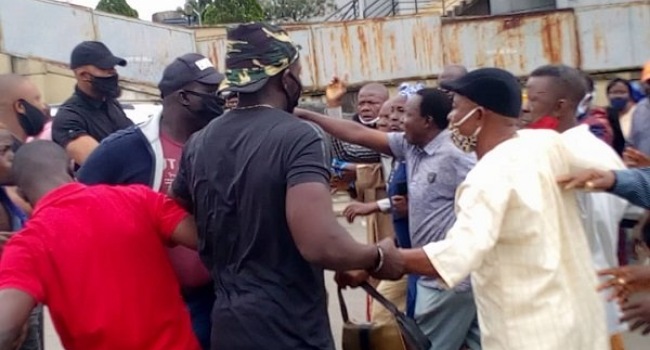 Imo pensioners who were reportedly assaulted by thugs at the state Government House in Owerri Tuesday had accused the state government of masterminding the embarrassing treatment meted out to them by the hoodlums.

The pensioners who were protesting the non-payment of their five months pension arrears were flogged by the street urchins near the government house.

Many of the pensioners suffered bruises from the incident.

While the senior citizens cried in pains, a detachment of policemen led by an Assistant Commissioner of Police, A.J. Moses, came to their rescue and dispersed the thugs.

The police officer pleaded with the pensioners.

Read also: Pensioners protest in Imo, say ’42 of our members have died of hunger’

One of the pensioners, Ebenezer Ibekwe, told journalists that the thugs were sent by the state government.

He said the pensioners would not be intimidated by the state government, adding that they would continue protesting until their pensions and gratuities are paid.

Ibekwe said: “Thugs were flogging us their fathers and mothers. I pity them because they have dug their graves. At Warehouse junction, while we were coming, they accosted us and poured water on us. This has never happened in this state before.

“The money we worked for and the government is sending urchins and idiots to assault people who are old enough to be their fathers, mothers, and grandparents.”

In his response to the development, the state Commissioner for Information and Strategy, Mr. Declan Emelumba, decried the protest.

He said the state government had paid the pensioners the arrears they were demanding but that only few of them (pensioners) were still having issues with the processing of their money.

The commissioner added that the problem was being resolved by the state leadership of Nigeria Union of Pensioners (NUP) and the state government.