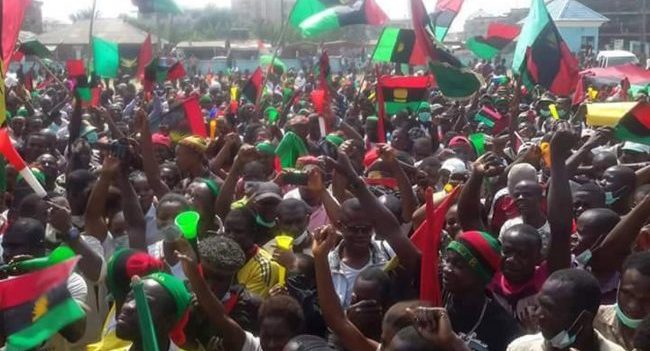 Hoodlums on Monday, in a bid to enforce the suspended sit-at-home order by the Indigenous People of Biafra (IPOB) reportedly went on the rampage in Enugu State, destroying properties and in the process, set ablaze a bus conveying tomatoes, vegetables and other foodstuffs to the state capital.

According to an eyewitness, the vehicle was set ablaze by the hoodlums believed to be enforcing the order at Edem junction, Ibeagwa, Nike, in the Enugu East Local Government Area of Enugu State, at around 5:45am.

The vehicle was reportedly going into Enugu from the Ugwogo end of the Opi/Enugu bypass when the miscreants blocked it and set it on fire after looting some of the items.

Sympathisers were said to have put a call to the State Fire Service, prompting a quick response by the Ogui Road fire service station.

An Enugu-based journalist who spoke to Ripples Nigeria on the incident, said the action of the hoodlums had put fear into the people who been forced to remain indoors despite IPOB lifting the weekly sit-at-home order.

After the initial declaration, IPOB leadership had announced a stoppage of the Monday sit-at-home, but some of the hoodlums are said to have insisted that it must continue until incarcerated IPOB leader, Nnamdi Kanu, is released.

The latest attack has brought to four buses conveying goods and foodstuffs that have been burnt in several parts of the South-East, in addition to several tricycles, shops and other properties allegedly destroyed by hoodlums for disobeying the sit-at-home order.

The State Police Public Relations Officer (PPRO), Daniel Ndukwe, could not be reached for comments at the time of filing this report.