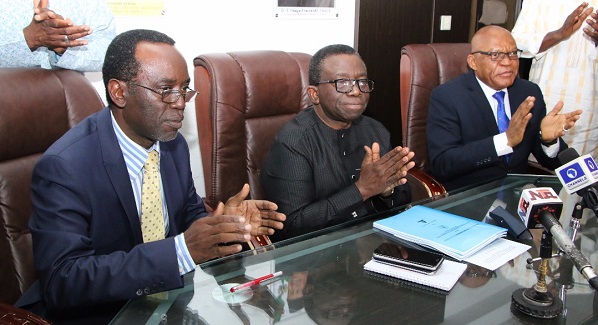 May & Baker Nigeria Plc has signed an agreement with the National Institute for Pharmaceutical Research and Development (NIPRD) for commercial production of anti sickle cell drug, NAPRISAN.

The agreement was signed recently in Abuja by Managing Director of May & Baker Nigeria, Mr. Nnamdi Okafor and the Acting Director General of NIPRD, Professor Olabayo Kunle, in the presence of the Minister of Health, Professor Isaac Adewole.

The Federal Executive Council recently ratified the Memorandum of Understanding (MoU) between NIPRD and May & Baker Nigeria, leading to the eventual signing of the commercialization agreement.

Speaking on the agreement, Okafor said that his company took on the task of producing NIPRISAN to provide succour to many homes who have been weighed down by the agony of sickle cell anaemia.

“We expect this product to be a commercial success and a leading product of our company as we intend to give it all the attention required,” Okafor said.

NIPRISAN is an anti sickling formula discovered by NIPRD researchers several years back. Its commercialization in Nigeria is expected to substantially relieve the sickle cell disease burden which is responsible for the death of hundreds of thousands of people in the country yearly and has brought agony to many families.

Industry analysts say they expected the new deal to encourage researchers to do more work that would throw up local medicaments for the disease burden in Africa.

Gross profit grew by 29 per cent from N2.5 billion in 2016 to N3.3 billion in 2017. Cost containment strategies saw cost of sales ratio declining to 64.91 per cent in 2017 from 70.0 per cent in 2016. Earnings margins followed the same growth pattern as the company earned 12 kobo in profit from every Naira invested.