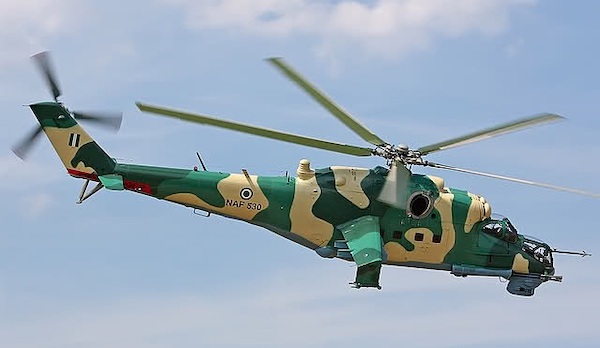 Residents of Benue State were on Sunday sent into confusion and panic after military aircraft and helicopters were seen hovering over some areas of the state.

The aircraft were first seen as early as 7am with rumours making the rounds that the military was hunting for suspected cultists and armed herders.

A resident who spoke on the development, said he saw two military helicopters which hovered severally around his vicinity in the Achussa suburb of Makurdi metropolis.

“The aircraft flew so low in our surrounding and then headed towards Wadata, NASME, Modern Market and Iniongun area.

“We have heard some sounds as heavy as that of an explosion of weapons,” he said.

Another resident also narrated that there were deafening sounds when the aircraft hovered around rural communities in Ukum area.

“We heard loud sounds in the Ukum area and people are saying that the soldiers have carried out operations in some criminal hideouts in the local government.”

However, a military personnel who knows about the operation said the observations were part of the commencement of Operation Whirl Stroke (OPWS)’s which is a 7-day clearing operation in Benue, Nasarawa and Taraba States.

“The operation was sequel to the incessant armed bandits’ operation in some communities across Benue, Nasarawa and Taraba States, which had resulted in the death of some villagers.

“We are in the middle of Operation Whirl Stroke which is a 7-day operation to clear the states of bandits and other criminal elements,” the officer said.

The clearance operation is coming following a recent attack on some soldiers on duty behind the NASME Barracks in Makurdi by some suspected armed herders, informing the reason the aircraft were seen hovering in specific areas around the barracks and Gbajimba in Guma local government area where alleged armed bandits have been reported to attack the villagers regularly.

The reconnaissance in Ukum is said to be connected to the recent massacre of 11 soldiers by yet to be identified bandits as the “clearing operation” reportedly covered the Sankera axis of Logo, Ukum and Katsina-Ala local government areas, all through to Yoyo River and Kwente in Kwande local government area where armed bandits said to be led by one Chekere, a former ally of the late militia leader. Gana, have been terrorising the community.