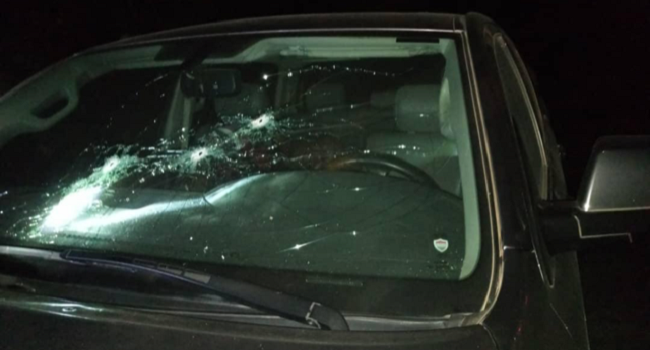 One of the suspects believed to have taken part in the murder of the immediate past Chief of Defence Staff, Air Chief Marshal Alex Badeh has narrated how a planned robbery turned murder.

The 25-year old suspect, Shuaibu Rabi was among the five persons arrested in connection with the crime.

During interrogation by the police in Hausa langauage, Rabi explained that information had leaked to them that Badeh was in possession of a huge sum of money with which he planned to purchase a parcel of land in Nasarawa state.

Police believe that Badeh decided to carry out transactions in cash because all his accounts had been frozen by the Economic and Financial Crimes Commission (EFCC) which was carrying out an investigation on him.

Recall that Badeh was reportedly killed between Koso and Kugwaru communities, along Keffi-Abuja Road on the 18th of December while he was returning from his farm with his driver sustaining gunshot injuries and his friend kidnapped.

According to reports, Badeh’s friend has since been released after payment of “ransom” by his family.

Rabi narrated, “What happened was that, on a certain day, my elder brother went to a market, where he met with one Churuma. Churuma told him that he got information that an old soldier (Badeh) wanted to buy a parcel of land but would be buying the land in cash.

“He said we would trail the soldier on that day and we would block him and collect the money. So, on that day, when we saw him coming, Churuma signalled to us that it was him. Some of us stayed behind his vehicle in case he would want to reverse while Churuma stayed in front.

“But when he (Badeh) saw Churuma with a gun, he did not do like he wanted to reverse, he attempted to hit Churuma with his car but Churuma dodged to the side and then opened fire on him.

“After that, we opened the car and found a bag of money and went with it. When they opened the bag, the money was beyond what I had ever seen before.”

Rabi said he and his accomplices succeeded in stealing a bag of money in naira.

It was gathered that Badeh’s killers closed in on him while the four military guards who provided security for him were said to have been a few kilometres away when the attack took place.

Until his death, Badeh was facing corruption cases with the EFCC for allegedly diverting N3 billion from the accounts of the air force.

Consequently, he had forfeited money and choice properties to the Federal Government before his death.

There were also reports that the ex-CDS met with the first Lady, Aisha Buhari and the Chief of Staff to the President, Abba Kyari weeks before he was killed, in connection with the criminal cases round his neck.

Meanwhile, the Police spokesman, Moshood Jimoh, disclosed in a statement in Abuja on Thursday, that efforts were ongoing to track down other accomplices.

He explained that the two principal suspects and three other suspects were not paraded so as not to jeopardise further investigation by the police while vowing that the force would not relent until everyone who participated in the killing was apprehended.

He said, “Two principal suspects who participated in the killing of the former Chief of Defence Staff and three other suspects have been arrested in connection with the heinous crime. They are now in police custody undergoing investigation.

“The investigation into the killing of the former CDS is being intensified to arrest other suspects still at large”, he said.