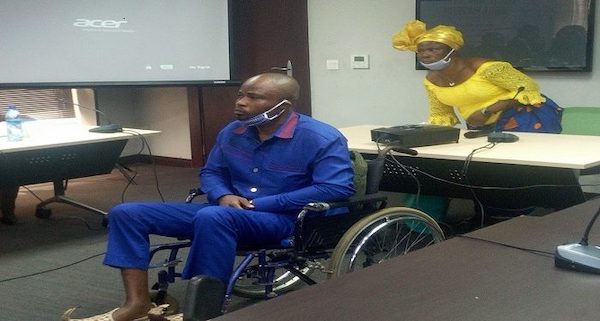 A trader, Ndukwe Ekwekwe, on Tuesday, told the Lagos State Panel of Judicial Inquiry probing complaints of human rights violations by men of the disbanded Special Anti-Robbery Squad (SARS) how he ended up in a wheelchair due to the controversial tactical squad’s brutality.

At the resumed hearing of testimonies against SARS by the panel, Ekwekwe, who spoke in Pidgin English, said he was thrown down from a two-storey building by operatives of the disbanded police unit on February 16, 2018 in Lagos.

He was accompanied to the hearing by his mother.

The trader told the Justice Doris Okuwobi-led panel that he was a dealer in phone accessories and other items using three shops at the Alaba market in Lagos.

According to him, his ordeal started when four arms-wielding SARS men showed up at in his shop at about 2:00 p.m. on that fateful day and handcuffed him without any explanation.

Ekwekwe said: “When I asked for my offence, the officers simply said they were acting on the order of the Inspector-General of Police, Mohammed Adamu.

“When my neighbours in the market came around to inquire what was happening, the policemen began to shoot in the air and fired tear gas to disperse them.

“I brought out my phone to call my mother, one of the officers snatched the phone and smashed it on the ground and began to stab me in the hand, neck, and back, while another hit my head with the butt of a gun.

“When I was being whisked to the SARS office in Ikeja, the policemen dispossessed me of N58,000 that I had on me.

“I was stripped naked and taken to the SARS torture ground where other SARS officers tortured other suspects.

“When I got to the torture ground naked, the SARS men on ground began to slap me while one of them asked the officers who brought me whether they should fire me. But the people who brought me said no.”

The trader also informed the panel that he was taken back to his shop on the night of the following day, where the policemen used a hammer to break down his shops and began to auction his goods.

Ekwekwe claimed he had goods worth N15million in his shops at the time.

He said when he began to agitate, the policemen threw him down from the second floor of the building, resulting in a spinal cord injury.

He was consequently confined to a wheelchair after a surgical operation.

Ekwekwe said he sold his house and land while his family lost everything trying to offset the hospital bills.

The panel admitted as exhibits several hospital documents and photographs.

The team adjourned till November 13 for hearing on his (Ekwekwe) mother’s side of the story.