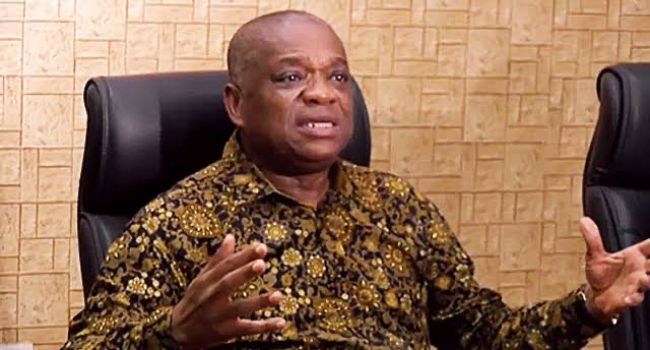 Former Abia State Governor, Orji Uzor Kalu, has once again opened up on the source of his stupendous wealth, which has positioned him as one of Nigeria’s billionaires.

Kalu, who is now a Senator representing Abia Central senatorial district in the National Assembly, was a guest on an Arise TV programme on Thursday.

He sought to clear the air on speculations that have been going round on how he became one of Nigeria’s richest men with hands in different pies including shipping, banking, oil and gas, manufacturing, publishing and transportation.

Kalu who made headlines a few days ago when he declared he would be contesting for the Nigerian presidency in 2023, had also vowed to match former Lagos State Governor and National Leader of the All Progressives Congress (APC), Bola Ahmed Tinubu, grit for grit, and many Nigerians were quick to allude his comments to matching Tinubu money for money.

The Chief Whip of the Senate, while responding to a question on how he made his money, went down memory lane and explained how he decided to go into business at the age of 19 after he was expelled from the University of Maiduguri for participating in a strike action.

Kalu narrated how he borrowed the sum of $35 from his mother and started trading commodities like palm oil, rice and sugar, which he would buy from the Eastern parts of the country and take to the north for sale.

He said he later diversified into furniture manufacturing and transportation and became a millionaire by the time he was 20.

He added that he however, hit it big in the early 80s when the Nigerian military government awarded him lucrative contracts to import and supply arms and ammunition to Nigeria’s military and defense forces under military President, Gen. Ibrahim Babangida.

Since then, Kalu said his business empire has grown in leaps and bounds, with the conglomerate expanding to include oil & gas, hospitality & travel, manufacturing & trading, financial services, media, and logistics, with roots in different countries, from Nigeria to Gambia, Botswana, Cotonou, Ghana, Guinea, Liberia, South Africa, Korea, and several others.

Related Topics:#featuredKaluKalu moneymoney
Up Next

Restructuring not my immediate concern —Kalu