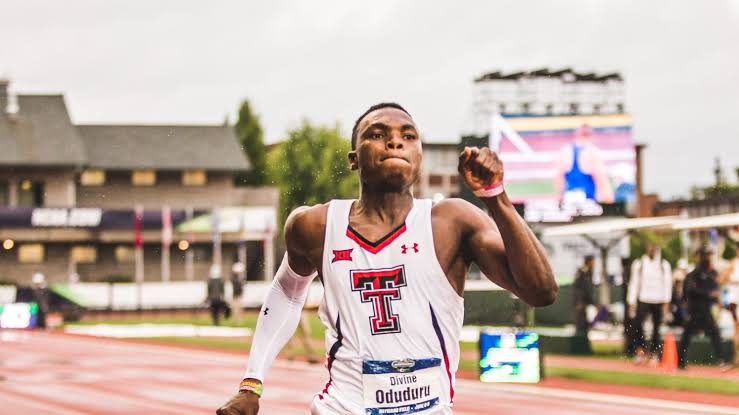 Nigerian athlete, Divine Oduduru has officially become the second fastest African ever after he raced excellently on Friday night.

On the continent, the Texas-based athlete is now second to compatriot and track legend, Olusoji Fasuba.

Oduduru, obviously the rave of the moment, attained gis latest feat after putting up the incredible performance at the National Collegiate Athletic Association (NCAA) championships.

The Texas-based athlete easily won the 100 meters in 9.86 seconds and that is the fastest ever by an African since Fasuba ran a slightly faster time of 9.85 seconds 13 years ago in Doha.

Below is the video of Friday’s race:

On the same night, Oduduru also emerged champion of the 200 meters with a time of 19.73 seconds.

He was the Nigeria record-holder in the 200m before Friday’s race. But he has lowered the record again with his winning time, which is third fastest in the world this year.

The sprinter, who earlier this week revealed he is the youngest of 10 children and he grew up in abject poverty, hails from Ughelli in Delta.

He has since become a success for himself and his family, as he makes the headlines each time he steps on the tracks.

NBA Finals: Raptors on brink of history after claiming 3rd win in 4 games against Warriors