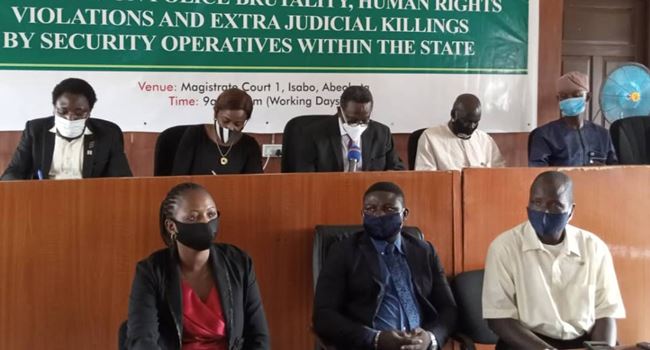 A widow, Adebimpe Sobowale, on Tuesday, told the Ogun State Panel of Inquiry probing alleged police brutality and rights violation how her husband was tortured and killed by police operatives over a N200 recharge voucher in the Odeda area of the state.

Sobowale, a mother of two, added that she was tortured and detained for four days by the police despite being pregnant at the time.

The woman said her husband was killed while in police detention over the recharge voucher allegedly traced to her phone.

Sobowale told the panel that she was arrested on February 8, 2020, and taken to a holding cell in the station where she was detained and tortured “with an electric cable.”

She said: “They used the thing which was plugged to an electric socket to shock me and asked me to write whatever they dictated to me as a statement.

“They said I belonged to a gang of fraudsters and they would kill me and no one will ask them.

“They said my SIM card was used to collect N200 recharge voucher. They said they tracked it at the Airtel office and it brought my picture.

“I told them I didn’t know what they were talking about and I refused to implicate myself in the statement. They arrested my husband on February 10 and released me the next day.

“That was the last time I saw my husband alive because some days later, I was informed that my husband had died in detention.

“My husband was a plank seller at the Mowe area of Ogun State before he was killed by the police.”

The widow informed the panel that she was arrested by three police officers but could only identify two of them, recalling that one of them was called Inspector Appiah Moses.

Sobowale, who demanded compensation for the death of her husband, said life has been difficult for the family as she can no longer take care of her two children after the demise of her man.

The panel adjourned the case till February 4 while the respondents were asked to produce the said Inspector Appiah Moses, who was the Investigating Police Officer (IPO) in the case and the woman that was allegedly defrauded.