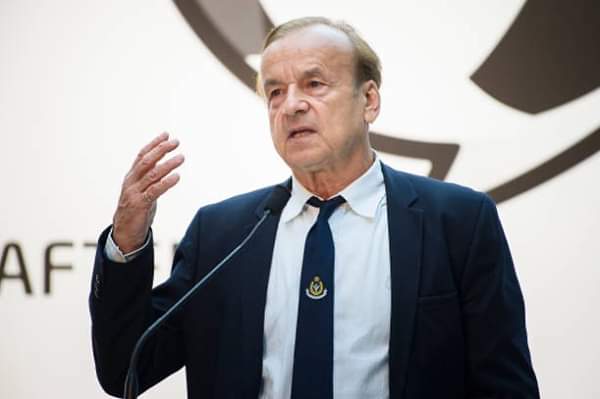 Super Eagles coach, Gernot Rohr has reacted to some of the clauses allegedly embedded in the new contract proposal by the Nigeria Football Federation (NFF).

The Franco-German manager has been with the national men’s team since 2016 and his current contract is billed to expire in mid-2020.

But the NFF has placed certain conditions that must be aggred to by Rohr before a contract extension is signed.

NFF president Amaju Pinnick stated on Tuesday that Rohr must abide with some conditions in the new contract, and Rohr, in an Instagram live interview with ESPN’s Collin Udoh, said he is ready to continue in the job.

“I’m waiting for the (contract) proposal. I just want to keep doing this,” he said.

Read Also: ‘Too late for a new coach’ – Kanu gives reasons why Rohr should stay

Rohr led the Eagles to the 2018 FIFA World Cup where they crashed out in the group stage, and led the team to the 2019 Africa Cup of Nations where they finished third in Egypt.

Despite getting other offers in the past few months, Rohr says he is not considering leaving his Nigeria job.

“Personally, I received a few offers from other countries but I rejected them. I just want to take this team to the next Africa Cup of Nations and the World Cup,” he said.

Reports have it that the NFF has lined up conditions such as, paying the coach in Naira and having him based permanently in the country, before a deal could be reached.

“All I can say is that I am always in Nigeria, most of my time. It’s been three years since I’ve been in Nigeria.

“I spend time in Nigeria but, all my players are in Europe and it is only one (Ikechukwu Ezenwa) that’s in Nigeria. I hear lots of things about it on social media, TV and newspapers, about what has been said. But I cannot comment on it. I have to see my players in their clubs and meet their coaches, watch their matches and communicate with them.

The Super Eagles are ranked 31st in the world and third in Africa. They are top of their group in the qualifiers for the 2021 AFCON in Cameroon.