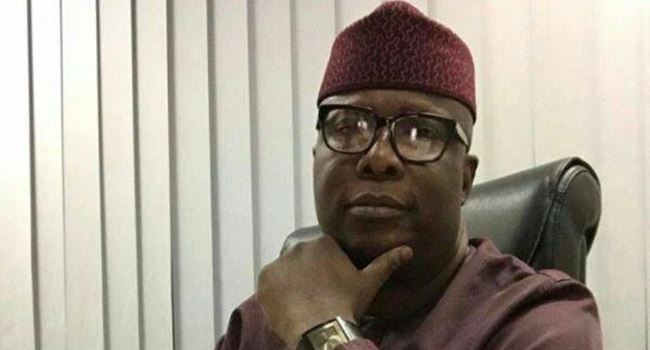 In a piece entitled “The Sunday Igboho I Knew” published on Monday, Ojudu said that he was instrumental to the meeting of Tinubu and Igboho where the APC leader persuaded the activist not to interfere with the election.

Ojudu alleged that Igboho was paid by the Peoples Democratic Party (PDP) to bring in thugs to cause mayhem and influence the outcome of the election but that after the encounter with Tinubu, Igboho shelved his plans and the rerun was held successfully.

Read the full piece below:

“It was in 2009. The Appeal Court sitting in Ilorin ordered a rerun in a number of polling units in the election between Segun Oni of the PDP and Dr Kayode Fayemi of ACN.

“Oni had in the main election and the election petition tribunal that followed been declared winner of the gubernatorial (governorship) contest. Our party, ACN, contested this, hence the declaration of a rerun.

“The election which came three months after the Appeal Court judgement was like a war. The PDP ruling at the federal level did not want to lose Ekiti while the opposition ACN led and financed by Bola Ahmed Tinubu wanted to take Ekiti by all means.

“A few days to the election, we got an intelligence report that the PDP bigwigs had perfected a plan to unleash thugs recruited from across Yorubaland on Ekiti. The plan was to kill and maim as many as possible, snatch ballot boxes and win by any means possible.

“Tinubu summoned me to Lagos and said Femi, “I have conducted a scientific opinion poll. You people can win this election. The only snag however is they are deploying state security as well as thugs against you. State security men, we can handle (and he did creatively handle them) but how do you handle thugs?”

“I then suggested we dissuade them by engagement and inducements. After all, they are in the business only for the money and not for ideological reasons.

“We reached out to both Ade Basket in Akure and Fada Geri in Ondo. Both were dreaded in political circles. We had a series of meetings with them and were able to squeeze an agreement with them that they would not make themselves available to the PDP for hire. I got them to even sign documents for me that they were going to stay off Ekiti elections.

“The biggest headache for us then was Sunday Igboho whom we learnt had been hired and paid by a senator from Osun to come and cause mayhem in Ekiti. Tinubu instructed we must get him at all cost.

“Six days to the election, we began our search for him. Eventually we met someone who had his number. I put a call through to him and he agreed to meet with me in Ibadan. We scheduled an appointment and had a meeting at a small hotel not far from Premier Hotel.

“Tinubu, I told him, had sent me to him that he would like to have a meeting with him. He said he would love to meet him as he had heard a lot of good things about him too. The problem he said was he was PDP and not ACN.

“I said that precisely is the reason why he wanted to meet with him. He asked if I could keep this a secret, I said why not. Papa (Lamidi) Adedibu, and our Osun Senator, he said must not learn about his meeting Tinubu. I told him there was no way they would know except it leaked from his side.

“He agreed to a meeting on Thursday preceding the election. I reported back to Tinubu who then relocated from his base in Lagos to Sunview Hotel in Akure. Igboho drove down alone at about 10.00 pm. I and Tinubu had a dialogue with him.

“Igboho!” Tinubu said, “I have heard a lot about your bravery. The Ekiti people have suffered too long under the rule of the PDP. They are looking for change. I learnt you have been hired to make this impossible. I have invited you to plead with you to allow the poll to be conducted peacefully. If after that, the PDP wins, fine. If the ACN wins, all well and good.”

“Tinubu went on and on, lecturing him on the beauty of democracy and unencumbered electoral process. By the time Tinubu finished with him, he became sober and contrite. “Baba”, he said, “I have heard you and I am pleased with what you have said. Whatever you want me to do, I will do even though I have collected money from the other side.”

“This was the extent Tinubu went to secure Ekiti for his party, ACN. Most of this, the candidate, Fayemi himself, was not even aware of.

“Tinubu then beckoned me to follow him to the bedroom of the suit he occupied in the hotel. “Femi, this guy appears sincere. It does appear we have dissuaded him.”

“Thank you, Baba,” Igboho said with a smile across his face as soon as he received a golden handshake for agreeing not to destroy in Ekiti as they had planned.

“He then said that he would be in Ekiti on the eve of the election but at 2.00 am, I should put a call through to him. He would put his phone on speaker and I should tell him I am a police AIG and that the police had discovered his presence in Ekiti and would be raiding in 30 minutes time. With that call, he would tell his minders he could no longer stay. He would pack his boys and their lethal weapons and leave town.

“Tinubu ordered food and drink for him. He would touch neither. He however overtime became comfortable in our midst and regaled us with several anecdotes from his career as a political enforcer. One particular anecdote stayed locked up in my memory till today because it was so funny.

“According to Igboho, he went through the tutelage of Chief Adedibu, the strong man of Ibadan politics. He said he was one of his most reliable and trusted thugs. At a point in their relationship, Adedibu, he said, began to suspect he was getting too powerful and independent. Adedibu, he narrated, then invited him to a meeting and told him he would like him to run for the chairmanship of a local government.

“He said he knew this was an attempt by Adedibu to bench him and he therefore told Adedibu that he was not educated, not able to speak English and could therefore not be chairman of a local government.

“Adedibu, he said, looked at him and barked an order STAND UP! He stood up. “SIT DOWN!” He sat down. Adedibu then said “and you claim not to be educated. Whatever is left, we shall add it unto you”.

“A week before the election, we had reserved and paid for all the rooms in all the hotels in Ekiti. The money ran into several millions. Tinubu, as usual, paid for this. The strategy was to ensure no thug or any undesirable element had a place to stay in the state. Security men and INEC officials had to appeal to me, sometimes through Tinubu, to release some rooms to them to stay. With this, we knew who was staying where. And we closely monitored them and their activities.

“Thus, when Igboho and his band of 50 thugs arrived in Ado Ekiti that Friday, we were able to monitor them till they were taken to be accommodated overnight in Government House due to lack of hotel accommodation in the state.

“This was the situation when at 2:00 am I did exactly what Igboho instructed me to do and he and his men fled town. Two hours after leaving, I got a call from him. They did a head count and found out two of their men were missing. Interestingly, they found out the two had gone to town in search of women. Igboho pleaded with me to help retrieve them and get them out of town the following morning.

“At about 5.00 am that morning I picked them up in front of the Fire Station at Fajuyi Park, took them to my house and by 6.00 am got a driver to take them out of town. We had the rerun elections. It wasn’t entirely peaceful. But thuggery and violence were largely reduced.

“This was my encounter with Sunday Adeyemo alias Sunday Igboho, lately crowned a hero in Yorubaland, by the reign of terror by herders and bandits.

“He has that occasional conscience you can appeal to. Let those who can rein in the herders do so and make the forests and highways safe again. Let farmers be able to carry out their occupation without fear of kidnap, murder and rape.

“Let us find a modern and permanent solution to this issue of itinerant herding that pitches a group of Nigerians against the other. Let us not ethnicise criminality. A criminal is a criminal and a crime is a crime whether perpetrated by Fulani, Yoruba, Igbo, Ijaw, Junkun, Bachama or Ibariba.

“We should do everything possible to stave off this crisis and stop beating the drums of war before it reaches a crescendo.”