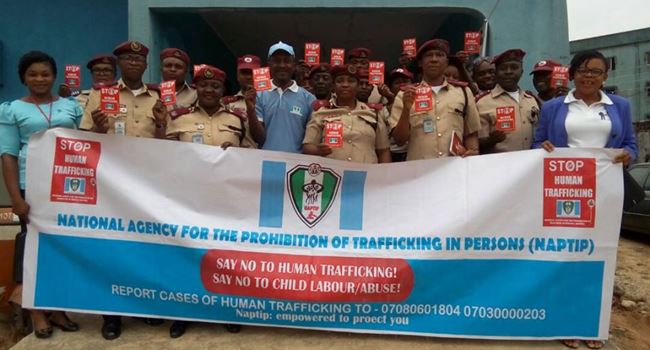 Two persons suspected to be involved in the illicit crime of human trafficking have both been arrested by officials of the National Agency for the Prohibition of Trafficking in Persons (NAPTIP).

The agency revealed in an interview with the News Agency of Nigeria (NAN) on Tuesday, that the two suspects were arrested on January 13, and no fewer than 21 victims were rescued from the suspected human traffickers.

According to Mr Nduka Nwawwenne, the Uyo Zonal Commander of NAPTIP, the 21 victims were intercepted by men of the Department of State Service (DSS) along Obot Akara Local Government Area in Akwa Ibom in a bus conveying them to the Western part of the country.

Nwawwenne also added that the two suspects arrested in connection with the crime were undergoing interrogation to determine the actual purpose of the traffickers.

He said; “We can say this is one of the success stories of collaboration we are having.

“The DSS has just handed over 21 victims of human trafficking yesterday (Monday), that is the essence of collaboration.

“Investigation revealed that they were coming from Cross River and they have a stopover at Obot Akara in Akwa Ibom, before proceeding. They were heading to the western part of Nigeria.

“They are mainly teenagers, between the ages of 15 and 18, many of them are males.

“We have arrested the driver and the bus conductor carrying them, and impounded the vehicle.

“There is another crime suspect we are trying to track, that is said to be working with the prime suspect,” he said.

Nigerien president sacks army chief, others for terrorist attack on military base