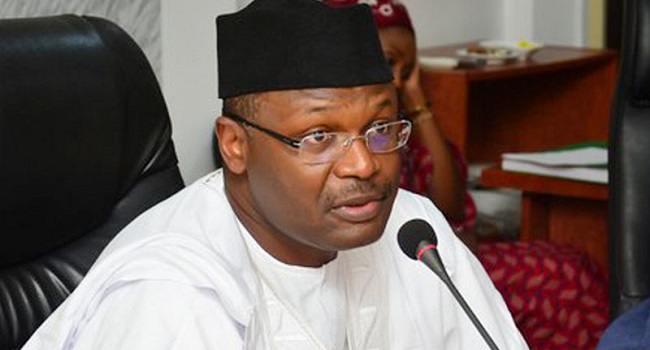 HURIWA urged President Muhammadu Buhari and the National Assembly to save Nigeria from witnessing another civil war as an aftermath of a definitively rigged 2019 gubernatorial election by dissolving the current INEC leadership it termed “heavily compromised, incompetent and irresponsible.”

The civil rights advocacy group made this call in reaction to the conduct of the Kogi and Bayelsa States governorship elections held on Saturday.

Speaking on the outcome of the polls where All Progressive Congress (APC) candidates emerged as winners in both states, the rights group maintained that the APC candidates were “railroaded into undeserved and purchased victories.”

In a statement signed by its National Coordinator, Emmanuel Onwubiko, HURIWA said what took place in those two states were a total “travesty of the electoral system and would not stand the test of time if Impunity and lawlessness were not the hallmarks of the current hierarchy of the electoral commission.”

HURIWA also proposed the immediate adoption of the relevant portions of the electoral reformation recommendation which were made by a high profile panel of experts headed by a one-time Chief Justice of Nigeria Justice Mohammed Uwais (rtd).

READ ALSO: BAYELSA: Secondus should resign for trading off ‘PDP’s political capital’ – Timi Frank. Is this the beginning of another controversy or brickbat?

Also the group wondered why Buhari “rejected the well thought out electoral Act amendments done by the eight-session of the Nigerian National Assembly which amongst other major recommendations legislated the introduction of electronic voting system.”

HURIWA expressed shock and consternation that the current administration could “blow away millions of public fund setting up the Senator Ken Nnamani electoral reforms Presidential committee but ended up dumping the recommendations from that panel in the dustbin of history.”

The Rights group said the government must show the political will and will power and then proceed to bring into being the “desired electoral reforms unless the current administration wants Nigeria to disintegrate in 2023 due to electoral violence that will be inevitable if the current electoral management body’s status quo remains.”

HURIWA also canvassed the adoption, by way of electoral legislative reforms, the practice of electronic voting system to stave off the recurrent cases of ballot box snatching by armed political thugs prodded on by politicians and assisted by corrupt armed security forces.

The rights group condemned the Police and the other security forces for failing to arrest those armed hoodlums who killed dozens of voters in Kogi and Bayelsa States.

It expressed fear that the “mini civil wars that took place as elections in Kogi and Bayelsa States in which the two dominant political parties – All Progressives Congress (APC) and Peoples Democratic Party (PDP) unleashed electoral violence leading to death of scores of voters shows that the 2023 general election if conducted by the same incompetent, corrupt and compromised INEC under the current hierarchy with the same compromised security forces could push Nigeria into a civil war because the current INEC leadership has severally failed the litmus tests of objectivity and sound judgment. Besides, the Rights group stated that going by the miscarriages of justice by the election tribunals and the supreme court in the litigation that trailed the rigged 2019 polls, shows that prospective political office seekers will rather adopt self-help measures than go to court.”

HURIWA, quoting a newspaper reports recalled that in “August 2007, ex-president Umaru Yar’Adua also set up a similar 22-man committee headed by Justice Muhammadu Uwais (CJN, 1995-2006) to undertake a review of the electoral system and suggest ways of reforming it. It concluded its job in December 2008, having asked for an extension of the initial one-year deadline on account of the massive number of memoranda it received. The report was thorough, exhaustive and frequently cited by stakeholders as an appropriate and adequate response to the electoral malaise that undermines the stability and development of Nigeria’s political system. In fact in 2010, ex-president Goodluck Jonathan, whose electoral altruism is increasingly coming into sharper relief, forwarded the report to the National Assembly for action. The legislature chose to dither.”

Election in Nigeria a war for the ruling class ―Falana