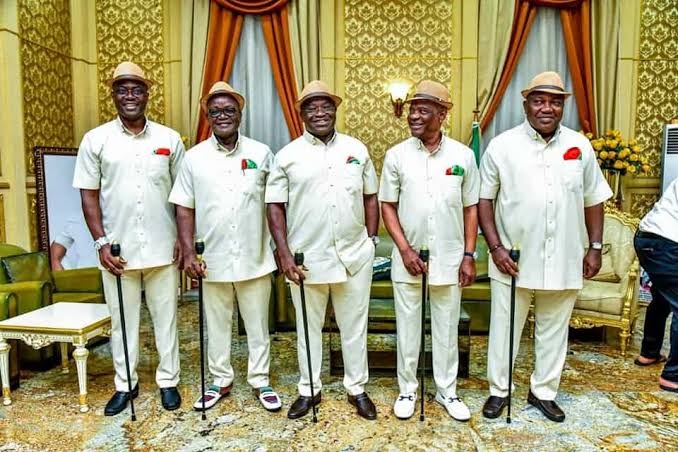 Civil rights advocacy group, the Human Rights Writers Association of Nigeria (HURIWA), has warned the G5, the group of five aggrieved governors of the Peoples Democratic Party (PDP), against endorsing the presidential candidate of the All Progressives Congress (APC), Asiwaju Bola Tinubu, ahead of the 2023 presidential election because of the Muslim-Muslim ticket of the party.

The National Coordinator of HURIWA, Comrade Emmanuel Onwubiko, who gave this admonition in a statement on Saturday, said if the rumoured endorsement of Tinubu by the G5 was true, then it would be a “betrayal of constitutional democracy and a gross injustice which negates the Federal Character principles”

Speculations have been rife that the G5 would throw their weight behind Tinubu and his running mate, Kashim Shettima after the group met the former Lagos State Governor in London last week.

Though the leader of the G5, Governor Nyesom Wike of Rivers State said on Friday that the group has not endorsed Tinubu, there is still apprehension as the G5 had promised to announce their preferred candidate sometime this month.

In the statement, HURIWA said any deal the G5 struck with Tinubu would be condemnable and a betrayal of themselves.

“Section 318(1) of the Constitution of the Federal Republic of Nigeria 1999 is clear on Federal Character principle as one to promote national unity, foster national loyalty and give every citizen of Nigeria a sense of belonging to the nation.

“However, the APC acted in total violation of this principle with the selection of a fellow Muslim, a former Borno State governor, Kashim Shettima, as Tinubu’s running mate.

“Any deal struck by the G5 with Tinubu is condemnable and it is a betrayal of themselves and constitutional democracy if it is true that the group is endorsing the Muslim-Muslim ticket of All Progressives Congress.

“This will mean negating the Federal Character principles of the Constitution; it will also show that the G5 is a sham and Nigerians should not take the five governors seriously because they are on the lookout for their selfish interests and not the interests of Nigerians,” the statement said in part.