I didn’t divorce my wife for supporting Buhari, both of us support him – Plateau man | Ripples Nigeria 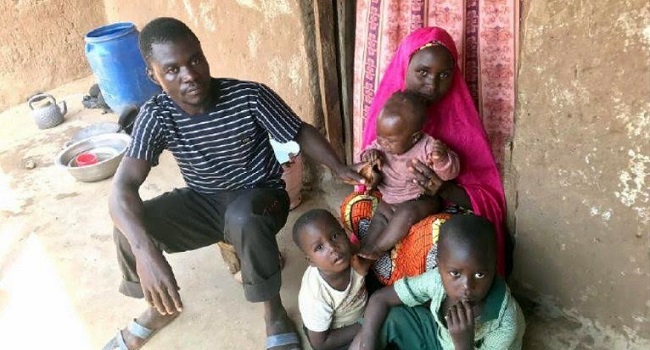 A couple earlier reported to have ended their marriage over the wife’s insistence on voting for President Muhammadu Buhari over the husband’s choice of Atiku Abubakar, has denied the report.

BBC Hausa had reported that Abdullahi Yada’u of Unguwan Gero, Kanaam Local Government of Plateau State, had assaulted and divorced his wife for insisting on voting for Buhari.

The report said Mr Yada’u insisted they should both vote Atiku Abubakar, the candidate of the opposition Peoples Democratic Party (PDP), but the woman refused.

The report was also published by Ripples Nigeria.

But Daily Trust on Sunday said its reporter who visited Unguwar Gero village found that the story was not true.

According to Daily Trust, the reporter met Mr Yada’u and the wife, Fatima, in their home in Unguwan Gero. They both told the reporter that there was never a fight between them.

The reporter gathered that the people who spoke to BBC Hausa were not members of the couple’s family and they lied to the BBC on record.

The reporter said he met Mrs Yadu’a bathing one of the couple’s three kids to get him ready for afternoon classes. She said her name is not Hafsat as stated in the BBC report.

She expressed sadness that the report about her marriage had “travelled far and wide”. Mrs Yadu’a said she and her husband did not listen to the BBC report.

She said their home was besieged by sympathisers and angry family friends after the report.

“We have been married for seven years. I feel the report was an attempt to disgrace my marriage,” she said.

“My husband and I live peacefully and happily, we have never invited a third party into our affairs and he has never raised a finger to my head not to mention beating me up to the point of knocking out my teeth.

“They claimed my husband had pronounced the divorce on me twice and assaulted me because he had asked me to vote for Atiku, and I insisted on Buhari. That was a lie, it never happened, both my husband and I are supporters of Baba Buhari,” she said.

Mr Yada’u, however, said that he is still in pains over the story.

“We have a place where young men assemble to discuss issues. So on that fateful Wednesday around 1:30 pm, they were discussing the presidential election and I suggested that it would be good for someone to put up the discussions on the internet.

“Khamisu Maidankali quickly said using radio would be better and he suggested the BBC. Shortly before I left the assembly, Khamisu Maidankali approached me and requested that we phone in the BBC together. But I told him I was only joking and had nothing to say. He later approached me again and I declined. I picked my motorcycle and left for Gajinduguri village.”

But that evening, he said unknown to him, Mr Maidankali and an accomplice made their way to the foot of a baobab tree on a hill where the villagers usually find cellular phone signal and communicate.

He said the accomplice, identified only as Hamisu, impersonated him, “while Maidankali disguised his voice to pose as Ibrahim Suleiman.”

Mr Yada’u also said he had to make a statement at Dengi Police station confirming that he was not part of the concocted story.

“I was invited by the Dengi police station and I made my statement there. I was so scared after what my friends did and was thinking of even running away. I felt really bad. The two people involved in this are at large at the moment because the Dengi police are looking for them,” Mr Yadu’a said.