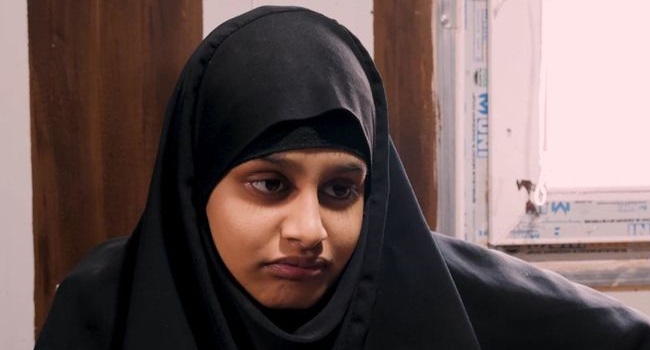 Four years after leaving the United Kingdom with two other teenage girls to join ISIS in Syria, Shamima Begum says she has given birth to a baby boy.

However, the teenage girl who fled east London for a new life with the Islamic State group, while speaking to Sky News said: “People should have sympathy towards me for everything I’ve been through.”

When asked if she regretted leaving the UK to join ISIS in Syria Begum said; “In a way, yes, but I don’t regret it because it’s changed me as a person.

“It’s made me stronger, tougher. I married my husband. I wouldn’t have found someone like him back in the UK.”

She continued: “I had my kids, I did have a good time there.

“It’s just that then things got harder and I couldn’t take it anymore.”

The development comes after UK Home Secretary Sajid Javid said the return of Begum who was15 and living in Bethnal Green, London, when she left the UK could be prevented.

“My message is clear,”Javid told the Times: “If you have supported terrorist organisations abroad, I will not hesitate to prevent your return.”

He added that if Shamima Begum, 19, did come home she could be prosecuted.

“We must remember that those who left Britain to join Daesh were full of hate for our country,” Mr Javid said.

“If you do manage to return you should be ready to be questioned, investigated and potentially prosecuted.”

Mr Javid also added that there were a range of measures available to “stop people who pose a serious threat from returning to the UK, including depriving them of their British citizenship or excluding them from the country”.