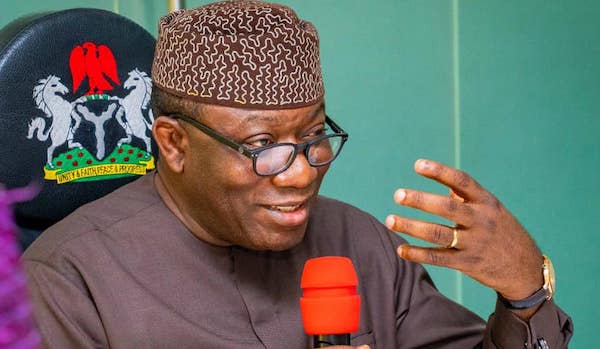 The Ekiti State Governor, Kayode Fayemi, has dismissed insinuations he is eyeing the presidency in 2023.

The governor who is expected to complete his second term as governor in 2022 and the Minister of Works and Housing, Mr. Babatunde Fashola, had been touted as the possible candidates to fly the All Progressives Congress (APC) flag in the country’s next presidential election in three years time.

President Muhammadu Buhari will complete his two-term tenure of eight years in 2023, and there are expectations the presidency would be zoned to the southern part of Nigeria.

But, in a statement issued on Thursday by his media aide, Segun Dipe, Fayemi said he is not working towards the 2023 presidential election.

The governor described reports on his presidential ambition as untrue, saying he enjoys his current position as governor of Ekiti and Chairman of the Nigeria Governors’ Forum.

The statement read: “Fayemi is a sitting governor and he chairs the Nigeria Governors’ Forum. He enjoys these roles and he is playing them to the best of his ability.

“His objective is that of engaging in processes such as negotiation, mediation, conciliation, and arbitration in order to move a seemingly violent conflict into non-violent dialogue, where differences are settled through conflict transformation processes or through the work of representative political institutions.

“He is interested in what is happening in every part of the country and, like he himself once stated, anything that affects the peace of any state governed by a member of the NGF would surely affect the solidarity of the forum.

“People like Fayemi bring people together. You find them in all kinds of places and in all kinds of circumstances. They are very lovable people who wish the very best for other people. Despite that his action as a peacemaker and reconciliator means a lot to other people, the governor is a modest person and he is focused on other people’s happiness.”