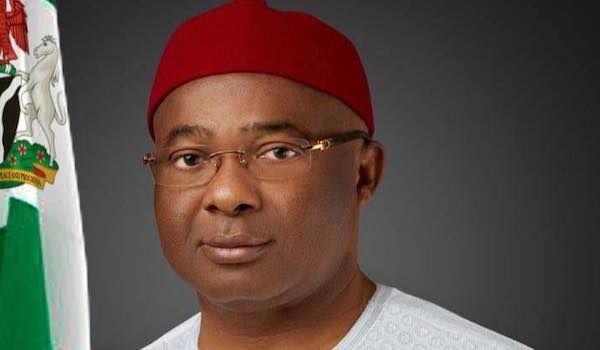 The Governor of Imo State, Senator Hope Uzodinma, on Monday revealed that the Governor’s Office in the state that was abandoned by his predecessor, Emeka Ihedioha, has been renovated by his administration.

The governor, who stated this in a state-wide broadcast to mark the occasion of his 100 days in office, added that the Governor’s Lodge, which he said was equally abandoned is been renovated and is 80 percent complete.

Speaking further, Uzodinma revealed that he slashed the N800 million provided in the Emeka Ihedioha’s 2020 budget, for renovation of government house, to N177 million.

He said: “It is sad to note that on assumption of office, the Governor’s Office and Lodge were in a state of utter disrepair. The previous administration abandoned both and preferred instead to make do with a make shift bush bar or Odenigbo guest house as governor’s office.

“This indiscretion on the part of past administrations made governance a public laughing stock. It reduced Government business to a child’s play.

“Meanwhile the Governor’s Office and Lodge became available for the tenancy of rats and rodents. This situation was unacceptable to me.

“Consequently we took immediate steps to remedy this sorry state of affairs. I am glad to inform you that I have renovated the Governor’s office with only N 177M, far less than the N800M the immediate past administration provided in the 2020 budget for its renovation.

“Let me also add that this was after obtaining a no objection certificate from Bureau of Public Procurement (BPP), in line with the procurement act of the state.

“Equally, the renovation of the abandoned Governor’s Lodge is 80% completed. This means that in a few weeks time, the Lodge will resume its role as the official home of the Office of the Governor of Imo State.

“All internal roads within the Government House Compound are being rehabilitated. Sam Mbakwe Exco Chambers which was run down has also been renovated.

“These immediate steps taken by this administration within the first 100 days in office by reviving the morale of the Civil Service, cleansing the public sector of a corrupt system that was choking the State to a comatose.

“Giving the State Secretariat a much-needed facelift and restoring the official Office and Lodge of the Governor to reckoning, all add up to the restoration of the dignity and respect of Government as an institution. Once again, after many years, those who have reason to do business with government will see us as serious and reliable partners.”