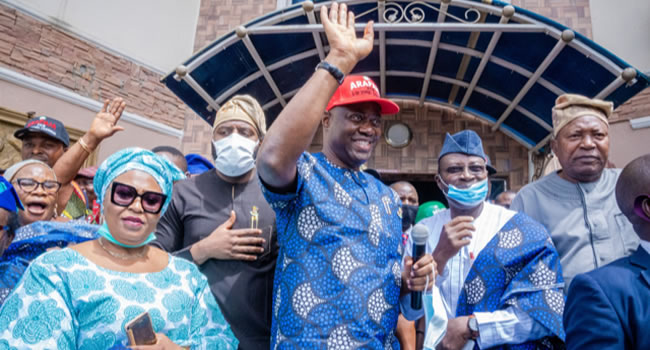 Governor Seyi Makinde of Oyo State, on Monday, said that he had to present his driver’s licence before being allowed into the venue of the PDP South-West zonal congress holding in Osogbo

Makinde made the disclosure while addressing newsmen on his arrival at the venue of the congress.

“Before I was allowed to enter into the venue, I had to show them my driver’s licence,” the governor said, adding: “we know quite sure that there must be ghost voters here.”

Ripples Nigeria gathered that the governor arrived at Children’s Development Initiative Foundation (WOCDIF), venue of the congress, at exactly 12:13 pm.

According to Makinde, getting it right at the zonal level will assist the party to perform well at national level.

“I want to assure you that we will put in our best and it will in turn assist us at national level.

“The message for every participant is very clear, which is getting it right at the zonal level,” he said.

Makinde, who noted that the accreditation of delegates started two hours behind schedule, said it was better to start late and get the best result at the end of the day.

“The process is going on well despite the fact that accreditation started two hours behind schedule. But, it is better late than to rush through the process and have challenges.

42 aspirants were cleared by the PDP screening committee on Sunday, to contest for the various positions in the zone.

The congress will be attended by 743 delegates from across the six states in the zone.