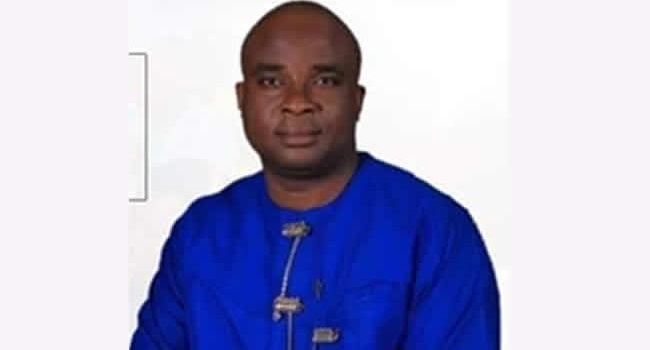 The governorship candidate of the African Action Congress, AAC, in Rivers State, Engr. Biokpomabo Awara has claimed that he rejected an offer of N3 billion made him by Governor Nyesom Wike for him to abandon his ambition to be the next governor of the state.

Awara stated this on Tuesday at a press conference he addressed in Abuja, expressing disappointment over the purported resignation and defection to the Peoples Democratic Party, PDP by his running mate, Akpo Bomba Yeeh.

Awara also said it was not true that the Minister of Transportation, Rt. Hon. Chibuike Rotimi Amaechi and the APC, had allegedly made them sign resignation letters as claimed by his former running mate.

It would be recalled that Awara’s former running mate, Yeeh, had resigned as from the joint ticket and joint the PDP, claiming that agents of Amaechi, a former governor of the state, visited him in his hotel room, forcing him to sign a prepared resignation letter that would come into effect three months after he must have come into office.

Awara however dismissed the allegations Yeeh made against the minister as false, adding that Amaechi and the All Progressives Congress, APC, offered him and his party unconditional support, because of the ideology and love they shared for Rivers State and its people.

The AAC candidate, who claimed his erstwhile deputy was aware of the N3 billion offer he rejected, said: “When the story of his resignation first came out as a rumour, that Rivers State Governor has offered him 200m naira to abandon me, I had no reason to believe it because that Elder Yeeh was aware I had earlier turned down an offer of N3b offered to me some days ago.

“I discussed this with my running mate and outlined why we must not succumb to the lure from the governor or any interest group. I was convinced that we were in agreement because he neither expressed nor alluded to a difference in opinion on the matter.

“When the rumour became rife by Sunday, I made several attempts to reach my deputy without success. I started developing some strange feelings pointing to a possible sell-out by him.

“I am aware that a key component of their plot is to attempt to smear the towering image and figure of the Honourable Minister of Transportation Rt. Hon. Chibuike Rotimi Amaechi. I want to state categorically that all the accusations made by my running mate against the Honourable Minister are blatant lies poorly crafted by his paymaster, Governor Wike and associates, and you could see how tough it was for him to read the script handed to him.

“The support the AAC got from the Honourable Minister and the APC was unconditional. Those conditions my deputy alleged in the statement drafted for him by Governor Wike are false, crude lies. The alliance between AAC and APC for the governorship election is as a result of our shared love for the State and our shared vision to liberate Rivers State from the shackles of cultism, rapidly growing poverty and the unsafe nature of our State in the hands of an administration that has wrecked almost everything in our State.

“It is indeed sad, regrettable, disheartening and pathetic that my running mate will act in the way he did. I feel pity and sorry for him. However, I must be quick to add that it is one move that has no consequences on the AAC governorship ticket. It is inconsequential in all ramifications. No sane man standing an election as crucial as that of Rivers State will say the things he said.

“One of the reasons I picked him as my running mate is because of the long running relationship between the Ogoni and Kalabari people, dating back to pre-independence. I also chose him because I saw a fatherly figure and capacity in him that could benefit Rivers Youths… I personally saw our joint ticket as Obama/Joe Biden ticket…,” Awara said.

Awara, who has consistently called on the Independent National Electoral Commission, INEC, to declare him as the winner of the March 9 governorship election in the state, further alleged that governor Nyesom Wike was squandering state resources to get him a second term by all means which. This, he said “would fail because Rivers people are wiser.

He also appealed to the youth and elders alike to work with him to turn around the fortunes of the state.

“Rivers people have firmly taken the position that the outgoing Governor Wike can no longer lead them. The antics of Wike in using State resources, our collective wealth to attempt to buy everyone and buy him a second term in office will certainly fail. The so-called defection of my deputy is a ploy to distract us. We will not be distracted. We remain focused on liberating Rivers people, our people from the inept, cruel and clueless administration currently running the State aground.

“Unemployment is on the rise daily. Private sector growth has a record low in our State. Kidnappings, criminality and youths in cultism is on the rise. Go to Trans Amadi, the industry daughter of Rivers State, all the industries are packing out to new places outside our State. I weep with deep sense of sorrow because our attention is taken off human and material value.

“HRM King Alfred Diette Spiff and his likes were older than me when they turned around the old Rivers State into a garden city of wealth with numerous infrastructure and bonded our rich Rivers heritage. But today, we are losing it. I speak to you my fellow youths and critics, you can be me too one day. Rivers State belong to us and we must work together to salvage her from sinking”, he said.