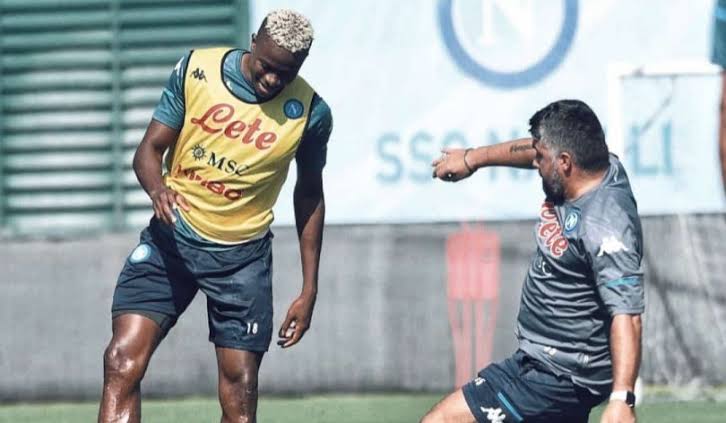 Napoli manager, Gennaro Gattuso has admitted that he permitted the return of Super Eagles forward, Victor Osimhen, to Nigeria for the holiday.

Gattuso has however said the player would pay for breaching COVID-19 protocols, which has led to him testing positive to the disease.

The infection served another blow to the club and player as the 22-year-old had been missing in action since sustaining a shoulder injury while playing for the Super Eagles last November.

But Osimhen on Sunday tendered a public apology to his Napoli teammates and coach, stating that he would not have even travelled to Nigeria let alone attending a party.

Gattuso acknowledged the apology but insists that the Nigeria international must face the repercussions of his action.

Read Also: ‘I was wrong to go to Nigeria’ – Osimhen apologises for breaching COVID-19 protocols

“There have been reports that the striker will be fined by the club and the gaffer did not rule that out,” footballitalia.net quoted Gattuso as saying.

“When I made a mistake, Marcello Lippi used to say he’d let me stew in my own juices for a while, to recognise what I’d done. That’s what Osimhen has to do now.

“He has already apologised, he’s a lad who gives his all when working. He made a silly mistake, he knows that.

“I am a coach, I don’t decide fines, especially as I was the one who gave the all-clear for him to return to Nigeria and so both of us were left embarrassed by what happened,” the coach added.

Napoli defeated Cagliari in the Serie A on Sunday, with Osimhen absent as he was still in isolation in his home in Italy.

He is set to also miss league games against Udinese and Spezia as well as their Italian Cup tie against Empoli.

Osimhen joined the Naples club at the start of the season after a superb season with Lille of France, and has scored twice in nine League appearances for the club.