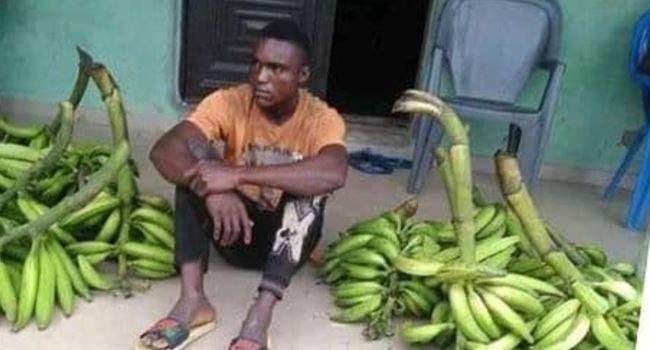 A young man who was arrested for allegedly stealing bunches of plantains in Bayelsa State, has allegedly confessed that he wanted to raise N10,000 for his girlfriend, who needed money to buy makeup kits.

According to a post on Facebook by one Afiriki Mieseifa on Monday, the young thief was caught in the Ebedebiri community in Sagbama Local Government Area of the state.

In the post, Mieseifa said during interrogation by a community leader, Peres Double, the suspect claimed that his girlfriend had reportedly demanded for the sum of money supposedly to buy makeup and had given him a deadline to get the money.

The suspect who said he’s from Angiama community in the same local government, also confessed that he became frustrated with the thought of losing his lover, so he entered people’s farms in Ebedebiri and harvested their plantains in a bid to sell them and raise money for his girlfriend.

“I decided to steal the plantains so I can sell and raise the N10,000 my girlfriend demanded to buy her makeup.

“She had given me an ultimatum to give her the money or she would leave me. It was the fear of losing her that I entered the farms to steal the plantains,” the suspect allegedly said.