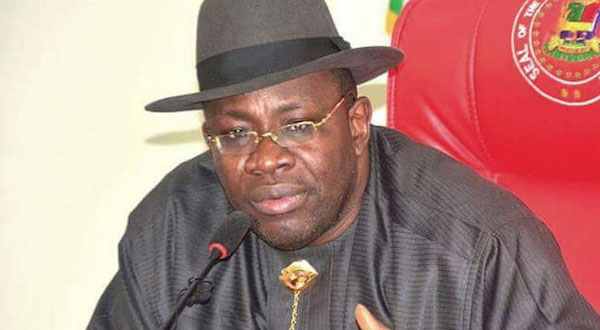 Bayelsa State Governor, Seriake Dickson, has described Saturday’s governorship election in the state as a military coup. He claimed that the election was a charade and a carefully orchestrated plan to forcefully take over Bayelsa state towards entrenching a one-party system.

Governor Dickson further alleged that former President Goodluck Jonathan was used by the All Progressives Congress (APC) against the Peoples Democratic Party (PDP) in the election.

He said the endorsement of governor-elect, David Lyon (APC) by Jonathan was regrettable and a part of the ploy by the APC to strategically take over the state.

While addressing a world press conference in Yenagoa on Tuesday, Dickson stated that PDP would challenge the result of November 16 Bayelsa governorship election in court.

According to him, the PDP did not lose the election as it was characterised by violence and widespread malpractices, which were carefully documented.

“Our candidate, Sen. Douye Diri and the party chairman have been speaking about the charade called election that took place in Bayelsa on Saturday, and the invasion of our state by security forces.

“The dehumanisation of our people and how the majority of the areas and in places, where our people were denied the right to vote for the candidate of their choice.

“The story is all out there that what took place in the state on Nov. 16 was not a democratic election.

“So, today, I’m here to add my voice to all that has been said already, and it was so brazen, it has never been like this in this state before,” he said.

Dickson added: “I know that in 2015, we went through a very though time, there was displayed of federal might, but at least, it was not as bad as this.”

He said that the perception that he alienated PDP stakeholders including the former president was unfounded adding that the primary election that produced the PDP candidate was credible.

“Jonathan remains my oga and I respect him, but there are lots of efforts by certain interest to create a rift between us, there is no politician that has been there for the former president than me.

“He has also helped me but it is unfortunate that I am being misconstrued in this matter of the election, I tried to meet Jonathan for 16 times and he opted to support a candidate that does not wish me well.

“I will soon write my memoirs and people will have a fair view of what happened, the visit of some APC governors to Jonathan who congratulated the APC candidate without congratulating the candidate of his party.

“It is strategic for APC leaders to use Jonathan to legitimise the illegitimacy that happened on Saturday,” Dickson said.