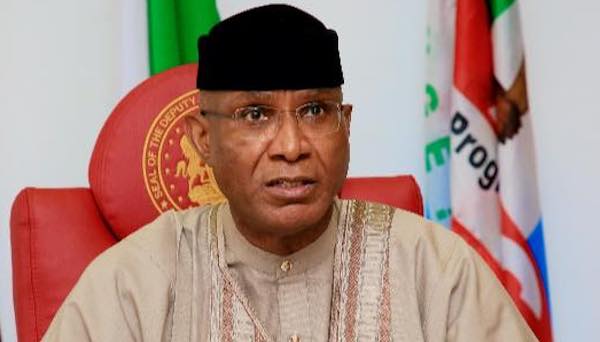 The Deputy President of the Senate. Ovie Omo-Agege, has recanted himself on a recent statement credited to him that he wrote the controversial Section 84 (12) of the amended Electoral Act because of the politics of his state, ahead of the 2023 general elections.

The Delta senator had come under harsh criticism last week when a viral video emerged where he was heard saying that he single-handedly wrote the contentious section of the bill which states that “no political appointee at any level shall be a voting delegate or be voted for at the convention or congress of any political party for the purpose of the nomination of candidates for any election.”

However, while speaking at an All Progressives Congress (APC) consultative meeting in Ughelli on Saturday, Omo-Agege recanted the statement, insinuating that what he said was meant to be a joke but was misconstrued and given another meaning by the media.

The senator urged the public to disregard the misinformation that he alone wrote the Electoral Act, noting that people are being misinformed about it.

“What I meant in that statement was that going forward, we are not going to sit down and allow the state government to use the instrumentality of the Nigeria Police to intimidate our people. I may declare that, yes, they may wield power here at the state level, that we are also available to checkmate the activities in Abuja.

“That was the thrust of the remarks that I made there but I also understand that there has been some misinformation and misconstruction of those remarks most especially to the extent that, I Ovie Omo Agege claimed authorship of the new electoral act.

“So people should take a deep breath, don’t lose their sense of humour; no one person alone writes a bill and passes a bill in the National Assembly.

Nigerians under the yoke of APC maladministration —Wike