I supported others’ aspiration, didn’t plan to be governor – Diri | Ripples Nigeria 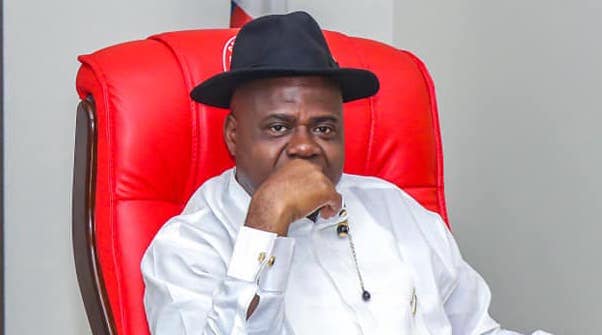 The Bayelsa State Governor, Douye Diri, said on Sunday he did not plan to be a governor.

Diri, who stated this during a thanksgiving service at St. Peter’s Anglican Church in Sampou, his hometown, told the congregation that he did not know the community would produce a governor while he was supporting the aspiration of others.

He said when it was time for God’s destined purpose, it would surely manifest.

The governor said: “Sometimes I wonder that all the time I had been supporting the governorship aspiration of others, I did not know that God had destined me, even before I was born, to be governor. So when your time comes, nobody can stop it.

“If the same God could do this for me, He will do it for you. Just be faithful, have free mind and He will do it again and again.”

Diri urged Christians to be faithful to God in order to unlock more earthly blessings and implored the people of the state to always give thanks and pay less attention to their worries.

“Let me commend the people of Bayelsa for taking out time across the state to thank God today. What can you offer to God other than to say ‘thank you’ to Him?

“He has the gold and silver. He also has the power, as power comes only from Him.

“If not for God, I will not be standing here as governor. So we must continue to thank Him with everything we have daily.

“I, therefore, join the rest of the people of Bayelsa to say thank you Lord for keeping us to see this first Sunday of 2021,” he added.

The governor also urged the citizens to realise that they were special in the sight of God, saying He always manifests Himself in the affairs of the state, whenever the agents of evil tried to plunge it into darkness.

“For us in Bayelsa, we are special people, and until we realise that we are special, we will continue to give room for darkness,” Diri concluded.

The governor represented the Peoples Democratic Party (PDP) in the November 16, 2019 governorship election in Bayelsa State.

Although he was defeated by the All Progressives Congress (APC) candidate, David Lyon, the then PDP candidate was installed as governor on February 13, 2020,  after the Supreme Court nullified Lyon’s victory in the election over discrepancies in the certificates of his running mate, Biobarakuma Degi Eremienyo.

Diri was sworn in as Bayelsa governor 24 hours later.

Ndidi in action as Maddison, Tielemans fire Leicester past Newcastle