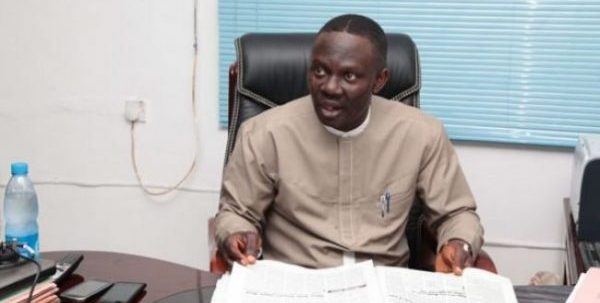 Prince Kassim Afegbua, spokesperson to former military president, Ibrahim Babangida, has described the actions of the Nigeria Police and the Department of State Security (DSS) as that of meddlesome interlopers and bullies.

He further noted that they were merely meant to intimidate, harass and embarrass him.

Afegbua had last week released a statement he credited to his principal which called on President Muhammadu Buhari not to seek a second term in office, but step aside for a younger candidate.

The statement was however followed immediately after by another, purportedly sent out and signed by Babangida denouncing the earlier one by Afegbua.

However, Afegbua insisted that the statement he issued was authorized by Babangida, whom also confirmed to a Lagos-based newspaper that he authorized Afegbua to issue the statement that caused ripples.

Not long after, the police declared Afegbua wanted, but the former commissioner wondered how they could do such a thing without even inviting him first, given that he is a public figure, and they know where he resides, and how to get in touch with him.

He later presented himself to the police.
Immediately he was done with the police, the DSS invited him over, also in respect of the statement he issued on behalf of Babangida.

Afegbua in a statement on Friday over the whole episode, said “The action of the Nigeria Police coupled with that of the State Security Service is at best that of a meddlesome interloper and sheer bullying, leaving serious developmental issues to chasing shadows with a view to intimidate, harass and embarrass me”.

Narrating his experience, Afegbua in the release he titled ‘One Statement, Many Ordeals’, said “In the last six days, I have gone through traumatic experience when I was declared wanted by the Nigeria Police. By the strength of that unprofessional declaration, I was treated like a common criminal and fugitive until I showed up at the Police Headquarters Abuja to physically present myself. After what the Police termed a no case issue, they were apologetic and I took my leave. In the evening of that day, Wednesday 7th February, 2018 I got a phone call inviting me to the Headquarters of the Directorate of State Security (DSS).

“I honoured the invitation on Thursday and spent 7 hours waiting for attention. I left the office at 6.50pm when it became clear nobody was ready to tell me what the invitation was meant for. I was informed to report back on Friday 9th February, 2018 at 11am. On arrival on Friday, having spent 2 hours, I was attended to by the Director of Operations and two others who interrogated me on the said statement I issued. My interrogation was recorded electronically and was made to write a statement affirming the issued statement, having collected all my personal details; house address, account number, international passport number and other information.

“I find this whole episode quite nauseating and utterly condemnable. I cannot rationalise why just a statement would amount to subjecting me to rigorous interrogation especially when there was no complainant. The action of the Nigeria Police coupled with that of the State Security Service is at best that of a meddlesome interloper and sheer bullying, leaving serious developmental issues to chasing shadows with a view to intimidate, harass and embarrass me.

“Let me state at this point that my life is in danger as we speak. I have been receiving series of unknown phone calls from people threatening me and my family. But I am resolute in the true spirit of a free born, that threats, intimidation, harassment and psychological torturing has never and will not stop me from exercising my right of free speech as enshrined in the constitution of the Federal Republic of Nigeria; as well as carrying out my professional responsibility. I will not submit to intimidation, harassment and threats. Certainly not. I have just a life to live and no one under God will live for ever”.

While thanking Babangida and his family for standing by him throughout the ordeal, Afegbua jokingly said “the support, accolades and motivation I received during this period have given me added confidence to seek elective public office in no distant future”.