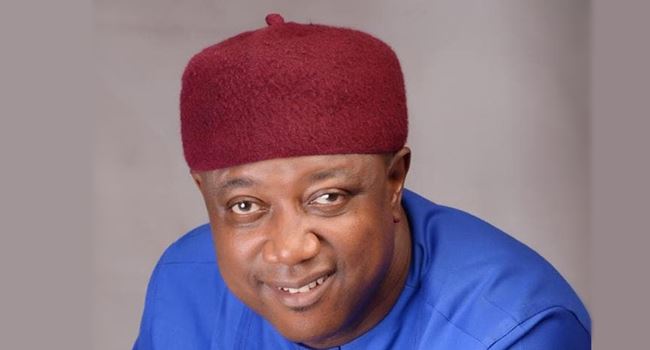 A candidate of the All Progressives Congress (APC), in the December 5, 2020, Imo North Senatorial By-election, Chukwuma Ibezim, has described the judgment of Justice Taiwo Taiwo, which affirmed Senator Ifeanyi Araraume as the authentic candidate of the party, as a miscarriage of justice.

Ripples Nigeria reported that Justice Taiwo, had in his ruling at a Federal High Court sitting in Abuja, on Thursday, ordered the Independent National Electoral Commission (INEC) to issue Senator Ifeanyi Ararume a certificate of return, for the December 5 by-election, within 72 hours.

In his judgment, Justice Taiwo maintained that Ararume was the valid candidate of the APC, saying with regards to the Appeal Court judgment in Abuja, Ibezim, who was the 3rd defendant in the case remained disqualified.

However, in his reaction, Ibezim accused Justice Taiwo of “Judicial rascality”, saying he does not have the locus to entertain a post-election matter, as it was meant for an election tribunal.

Speaking with newsmen after the judgment, Ibezim said: “Today’s judgment is a sad commentary on our judicial process and democracy. Why Justice Taiwo decided to embark on this judicial rascality is still a surprise to me. The question is, on what premise did justice Taiwo deliver this judgment? If it was a pre-election matter, it was filed out of time. If it is a post-election matter, Justice Taiwo does not have the locus to entertain it. It is the tribunal.

“Justice Taiwo is supposed to be reported to the National Judicial Council for judicial recklessness. The issue of who is the authentic candidate of APC for the Imo North bye-election was decided by the Supreme Court in its judgment on February 5, which went in my favour. Araraume was not a party to the bye-election.”

Meanwhile, in an earlier ruling, the judge dismissed the preliminary objection filed by the APC and Ibezim challenging the jurisdiction of the court to entertain Ararume’s suit, describing it’s as “an attempt to arrest the judgment”.

The judge held that the objection lacked merit because Ibezim being purported by APC as its candidate in the bye-election had been disqualified by a Federal High Court and later Court of Appeal for supplying false information to INEC, to secure clearance to participate in the election.

NASS REPUBLIC: As National Assembly declares self broke. Two other stories, and a quote to remember