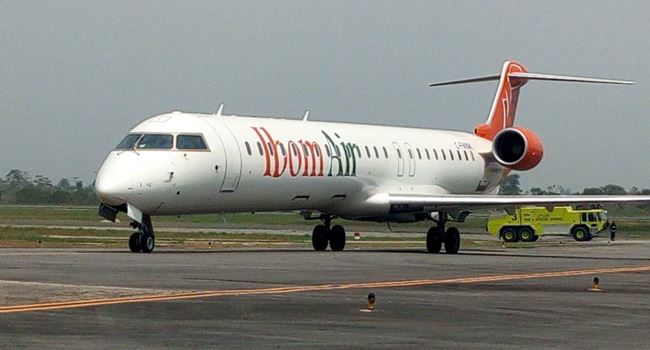 Ibom Air, one of Nigeria’s carriers, has opted to not participate in the planned suspension of flight operations by Airline operators on Monday, May 9, 2022, over the rising cost of aviation fuel.

Ibom Air disclosed it decision in a statement on its Twitter account shortly after Minister of Aviation, Senator Hadi Sirika appealed o airline operators to reconsider their stance on shutting down.

In a statement on Saturday, Ibom Air stated that it acknowledges the existential threat that these runaway fuel price increases pose to the air transport industry in Nigeria and agrees that this out-of-control situation is simply unsustainable.

It however noted that every airline has its unique business model and pressures, adding that it believes that in spite of the escalating fuel prices, airlines volunteering to stop operations would rather exacerbate an already bad situation.

“Ibom Air has financial obligations to suppliers, financiers and staff, which depend on the uninterrupted flow of revenue to service. More importantly is the fact that having been paid by customers in advance for flight bookings we are bound by contract to deliver the services already paid for, to avoid exposing the airline to the risk of avoidable litigation.

“Apart from the above factors, Ibom Air is currently the only airline serving Akwa Ibom State directly and as such, any voluntary stoppage of operations would completely cut off access by air into and out of the State. Such action would be directly in conflict with and detrimental to the interest of our shareholders,” the airline explained.

The airline hinted that its inclusion as “signatory” to the statement released by AON must have derived from its active and committed membership of the AON.

“The above notwithstanding, we identify very strongly with our AON colleagues and will participate in every effort to resolve this frightening situation as soon as possible in the interest of our business, our customers, our stakeholders and our country,” the airline added.

Meanwhile Sirika in a statement by his Special Assistant on Public Affairs, Dr. James Odaudu revealed that any planned strike action by airlines would have a severe impact on the already “distressed economy”.

The statement reads: “about the difficulties being faced by the airline operators in the country in procuring aviation fuel, but said there is little his ministry could do as the issue of aviation does not fall within his purview.

“The attention of the Honourable Minister of Aviation, Senator Hadi Sirika, has been drawn to reports that the nation’s air transportation system will be disrupted as from Monday May 9th, 2022, following threats by airline operators to shut down operations as a result of rising cost of Jet A1, otherwise known as aviation fuel.”

“We also acknowledge that the airline operators are in the business to make profits, while servicing the very critical sector that is not only the preferred mode of transport for most Nigerians, but also the main international gateway to the nation.

“Unfortunately the issue of fuel supply is not within the purview of the Ministry and so the much it can do in the present situation is to engage with agencies, institutions and individuals in positions to provide succour to the airlines. This is already being done by the relevant team led by the Honourable Minister.

“While the efforts to assuage the situation are on, we wish to appeal to the airline operators, even in the difficult situation, to consider the multiplier effect of shutting down operations, on Nigerians and global travellers, in taking their business-informed decisions and actions.

“We also assure Nigerians, especially stakeholders in the sector, that the Buhari administration remains stoic in its commitment to the creation and sustenance of an environment that promotes the growth of the aviation industry where major players like the airlines can operate in a profitable and competitive market.”

Related Topics:Ibom Air
Up Next