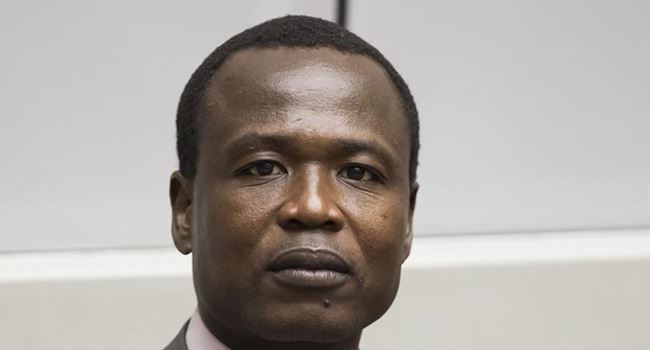 Ongwen was sentenced on Thursday after being convicted in February on 61 counts, including forced pregnancy which had never before been brought before the Hague-based ICC.

He was also found guilty of murder, rape, s#xual slavery and conscripting child soldiers, among other charges.

“In light of the gravity of the crimes you have committed, the chamber sentences you to a total period of imprisonment of 25 years.”

According to documents presented in court, Ongwen who was abducted by the rebels at the age of nine and grew up to become one of the deadliest commanders of the LRA, was said to have ordered attacks on refugee camps in the early 2000s while serving as a commander of the armed group led by fugitive Joseph Kony, which has waged a brutal war in Uganda and three neighboring countries to establish a state based on the Ten Commandments of the Bible.

Ongwen was facing a life sentence but the prosecution argued that his history of abduction by the rebel group warranted a lesser sentence, and requested 20 years in prison.

“This is a circumstance that distinguishes this case from all others tried by this court,” said Colin Black, a member of the prosecution team, at the sentencing hearing at the ICC.

After pleading for acquittal during the trial, stressing that the accused had himself been a victim of the rebel group’s brutality, the defense asked for 10 years in prison for the former child soldier, nicknamed the ‘White Ant,’ during the sentencing hearing.

Ongwen has always denied “in the name of God” all the accusations against him. He told the ICC that the LRA forced him to eat beans soaked in the blood of the first people he was forced to kill as an initiation after he was abducted.

“I am before this international court with so many charges, and yet I am the first victim of child abduction. What happened to me, I don’t even think it happened to Jesus Christ,” he added in his defence.

In finding him guilty, the ICC judges acknowledged that Ongwen had suffered greatly himself but said his crimes were committed “as a responsible adult and commander of the Lord’s Resistance Army.”

According to the United Nations, the LRA massacred more than 100,000 people and abducted 60,000 children in violence that has spread to Sudan, the Democratic Republic of Congo and the Central African Republic.

Ongwen, who surrendered in 2015, is the first LRA commander to be tried by the ICC while the group’s founder, Kony, is believed to still be at large and is the subject of an arrest warrant from the court.