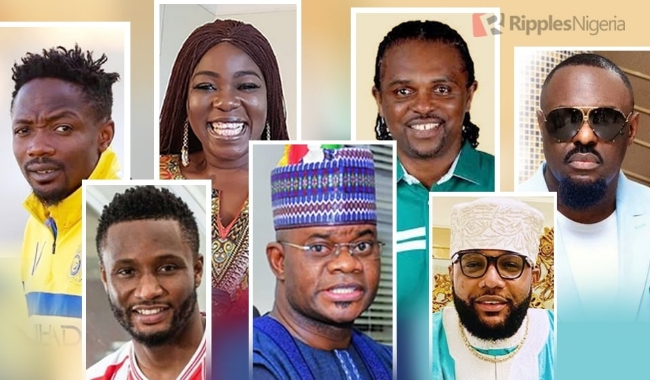 When former Governor of Akwa Ibom State, Godswill Akpabio, held sway with the unusual moniker, “Uncommon Transformer,” he had a crude philosophy which read:
“What money cannot do, more money can do.”

He may have had in mind Kogi State Governor, Yahaya Bello, whose quest to run for the presidency of Nigeria in 2023 has made him behave like a drunken sailor engaged in a macabre dance of foolery, encouraged by praise singers.

The choristers singing Bello’s hosanna sure know where their bread is buttered as the Governor has turned Kogi into a Mecca where money rains on anyone who goes there to join the alleluia singers.

As far as these motley crowds are concerned, Bello is a demi-god and should be sanctified. In fact, if he had lived in the days of gods like Amadioha, Sango, Ogun, Orunmila and Osun, he would have been classified as a deity whose effigy should be worshipped with sacrifices.

Bello claims all Nigerians want him to become president in 2023 and has continued to encourage the vociferous chorus of every money mongering ‘fast guy’ and celebrities, including top football stars, Nollywood practitioners and every imaginable group in the land.

No doubt, the governor sure enjoys the beats and rhythms of the music being churned out by the cheerleaders. From the likes of actress Destiny Etiko and veteran star, Ada Ameh, actor Jim Iyke, to football legends like Nwankwo Kanu and Austin Okocha, to former Super Eagles captain, Mikel Obi, to present captain, Ahmed Musa, Kelechi Iheanacho, mixed martial arts world champion, Kamaru Usman, to music star, KCee and his brother, E-Money, celebrity ‘barman’ Cubana Chief Priest, and even political jobber, Femi Fani-Kayode, every possible Tom, Dick and Harry have had a field day at the Lugard House in Lokoja, attending Yahaya Bello’s money fest and have gone away smiling.

However, the crux of this piece is Nigerian celebrities who have visited the ‘Kogi ATM’ to endorse Bello for the 2023 presidency.

A look at the rundown of celebrities who have visited the ‘King Lion’ as he prefers to call himself reads like a list of the who is who in the Nigerian sporting and entertainment industry. Enjoy the roll call:

In January, Super Eagles captain, Ahmed Musa was the first star to pay a visit to Yahaya Bello where he endorsed the Kogi governor for the 2023 presidency.

After handing over his official jersey to the young governor, Musa described him as a man of integrity for promoting peace and harmony among his people, and the sort of person Nigerians want to become president in the future.

Musa also declared his total support for Bello’s campaign efforts and vowed to get all his fans to support the ambition and join the Yayaha Bello team.

In February, drama queen Destiny Etiko was one of the first Nollywood actresses to visit Yahaya Bello as part of a small group of actors led by the President of the Actors’ Guild of Nigeria, Emeka Rollas, who said they had gone to the state to identify ‘with the good works the governor was doing in Kogi State and to beg him to consider running for president in 2023.”

Also in February, ‘almost forgotten’ Nolywood bad boy, Jim Iyke, caused a stir when he posted pictures on his Instagram page revealing that he had visited Yahaya Bello with his team to “discuss an important business deal.”

The post drew the ire of his fans who wondered why Iyke should visit Bello who, in the eyes of the people, has not done well for the people of his state.

Read also: LongRead: Bandits holding over 300 Nigerian kids since May. Here’s what we know

Sharing the photo, Jim wrote:
“Took my team for a meeting with the affable Governor of Kogi state, H.E Yahaya Adoza Bello for our new project.”

According to insiders, Iyke did not leave the King Lion empty handed as he reportedly had his pockets filled up while workers in the state were being owed several backlogs in salaries.

She was hosted to a lavish reception and even given a chieftaincy title and of course, ‘drank’ from the ‘Kogi ATM’ magic.

At the end of the football match which Bello featured and scored the winning goal, the ex-soccer stars unanimously endorsed him for the 2023 presidency, saying he is the best man for the job.

The sheer amount of money spent to host the event had former Kogi East Senator and Bello’s number one enemy, Dino Melaye, screaming:
“Oh my State! Oh my Kogi! When other Governors are inviting President, V P, Governors and Eminent personalities to commission projects, Yahaya Bello is inviting celebrities and ‘jekinje’ individuals to endorse him and his party. I remain his only capital project in Kogi State.”

It was the turn of singer Kingsley Okonkwo, aka KCee, his business mogul elder brother, Emeka Okonkwo, popularly known as E-Money, and his entire crew members including celebrity barman, Cubana High Priest, to pay an endorsement visit to Yahaya Bello at his palatial mansion in Abuja.

After the visit, Bello wrote on his social media handle saying that he had had fruitful discussions with his guests which were “centered around youth involvement in governance and the unity of Nigeria where religion and ethnicity will not define the people but their character.”

June was the turn of former Super Eagles and Chelsea midfielder, Mikel Obi, who also paid a visit to Yahaya Bello and ended up endorsing him for the 2023 presidential race.

While appreciating Bello, the new Kuwait SC star said:
“It is an honour for me to finally meet His Excellency personally after all the good things I have heard and read about him from not just the people of Kogi State but from Nigerians.

“My main aim is to come here to show my appreciation and to thank him for all the things he has been doing for the people and also to support him in whatever future political positions he wants to go into. I will like to be there to support him, to be there by his side through this journey for him to achieve whatever he wants which is for the betterment of Nigeria.”

In June as well, Leicester City and Super Eagles forward, Kelechi Iheanacho, stormed the Lugard House in Lokoja to pay a courtesy visit to Yahaya Bello to fan the embers of his 2023 presidential ambition.

Fresh from winning the English FA Cup, ‘Senior Man Kelz’ as he is fondly called by his fans, decided to make Kogi his first stop when he came to Nigeria and was gladly received by Bello who gushed on his Facebook page with the words:
“Finally, Senior Man Kelz, Kelechi Iheanacho don cut soap for me! It is always a pleasure to meet a teaming, patriotic, vibrant #nigerian#youth.
“Congratulations once again for your #FaCup win. The future of our great nation is the younger generation. The time is now. God bless #nigeria”.

After presenting his belts to Bello, the Nigerian Nightmare made a public endorsement of the youthful governor and promised to mobilize his fans both home and abroad to vote for the ‘King Lion’ of Kogi.

Does Bello have what it takes?

The Kogi State Governor, like any other eligible Nigeria, is qualified to aspire to be the country’s president in 2023 or anytime he wants to go for it.

At 45, Bello is capable enough to dream of occupying the Presidential Villa in Abuja but has he shown the capacity and the aptitude of being a leader of a complex country like Nigeria?

His past antecedents, verbal misadventures, the lack of visible developments in Kogi State, abject poverty in the state, with workers groaning over unpaid salaries running into months, much is left to be seen if Bello has the magic wand to lead Nigerians.

For a man seeking to ride on the crest of democracy, rule of law and a future driven by technology, Nigerians would not forget in a hurry how Yahaya Bello abused democratic process to force his deputy out of power and turned himself into a global laughing stock by making light of the coronavirus pandemic.

The days ahead, no doubt, would be interesting as Nigerians interrogate Governor Bello’s competence, character and capacity.

LongRead: Bandits holding over 300 Nigerian kids since May. Here’s what we know