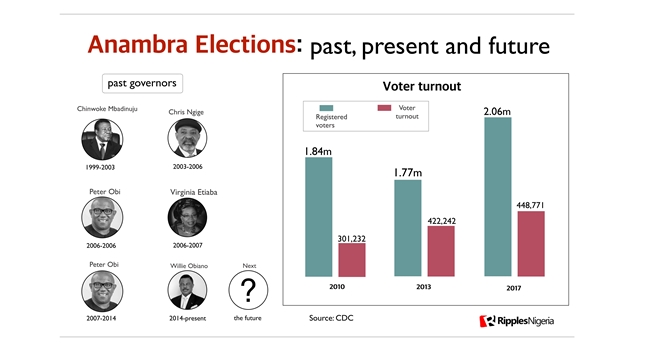 Anambra State elections have been a source of excitement for locals for many years, as it is a time for the rich to flaunt their wealth.

Indeed, the four civilian governors who have ascended the office have all been either affluent or had significant ties to be bankrolled.

Chinwoke Mbadinuju was the first to be elected in 1999, and it is commonly reported that oil mogul, Emeka Offor, was a close ally.

Chris Ngige is also reported to have rode on the back of Chris Ubah’s connections, just as Peter Obi was as wealthy as those who contested against him for the position.

Obi was also reported to be the man behind the rise of Willie Obiano as the state’s incumbent governor.

However, it appears that this time is different; security, rather than money, appears to be a major issue for residents in the run-up to the 2021 Anambra State gubernatorial election which is set for November 6, 2021.

There are, however, seven females vying for deputy governorship position.

Data obtained from the Debt Management office show the state has a domestic debt of N55.01 billion and an external debt of $115.8 million.

Improving the Internal Generated Revenue (IGR) of the state will be one of concern for the candidates.

Voter apathy has always been a recurrent theme for Anambra elections despite the amount of money on display.

The Independent National Electoral Commission (INEC) confirmed that the total number of registered voters for the election is 2.5 million (2,525,471).

This is an increase from the 2.15 million registered in 2017 out of which only 457, 511, actually came out on Election Day to be accredited.

Interestingly, INEC figures show that only 21.74 per cent of the registered voters (448,771) actually cast their votes.

In 2013, 23 candidates contested in the election with 1.77 million registered voters.

However, only 580,820 of the registered voters actually voted, representing 32 percent of the total.

The local governments where it will be won and lost

Voters in Ihala, Anambra east, Njikoka, Awka South and Ayamelum together gave the two top candidates from the last election, Willie Obiano of APGA and Tony Nwoye APC a total of 115,860 out of the total 422,314 votes cast.

RipplesMetrics: Nigeria’s 2022 budget serviced by debts but filled with ‘invisibles’ that would not be tracked