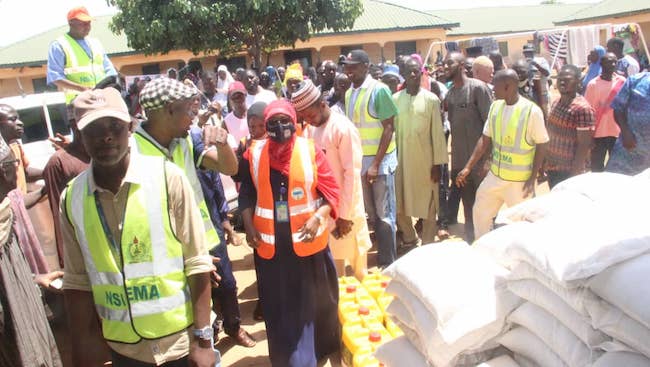 Director General of NEMA AVM Muhammadu Muhammed (rtd.) flagged off the relief distribution in Kuta, the headquarters of Shiroro Local Government Area of the state.

A statement by Manzo Ezekiel, Head, Media and Public Relations, NEMA, said the agency’s DG who was represented by the Head of Minna Operations Office, Hajiya Zainab Ahmad Saidu sympathised with the affected persons and said the relief materials approved by President Muhammadu Buhari were delivered to complement the efforts of the Niger State Government and others to provide them with succor over their situation.

A joint assessment said to have been recently conducted by staff of NEMA and Niger State Emergency Management Agency, showed the IDPs were in need of food support, the NEMA boss explained.

He noted that it was on this basis that the presidential approval was obtained and the requisite materials comprised of 5412 bags (10kg) of rice, 5412 bags (10kg) of beans, 500 kegs of vegetable oil, 500 cartons of seasoning cubes and 500 bags of iodized salt were delivered to them.

He further explained that the materials would be distributed directly to the affected persons in the camps and host communities by NEMA staff in collaboration with officials of the state Emergency Management Agency.