If I can sacrifice my parents for Biafra, I will sacrifice everything –Nnamdi Kanu | Ripples Nigeria 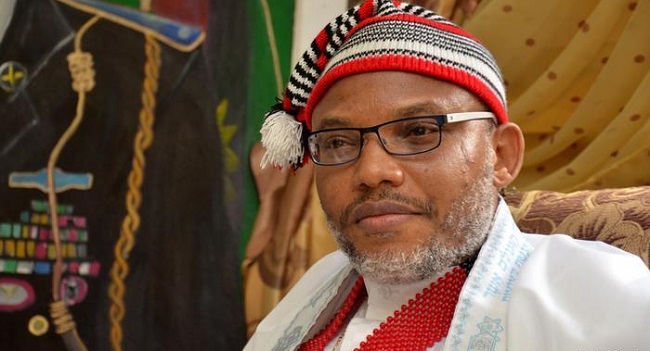 Mazi Nnamdi Kanu, the leader of proscribed Indigenous People of Biafra (IPOB), has vowed to sacrifice anything and everything to achieve his dream Republic just as he sacrificed his own parents in the quest.

Kanu made the vow on his Twitter handle on Sunday, adding that nothing will ever make him back down from the struggle for the freedom of Biafra, even if it will cost him his life.

Kanu insisted that for him to sacrifice his own parents in the Biafra struggle, nothing more will be too much for him to give to see the realisation of Biafran Republic.

He added that just as he had sacrificed his parents for the Biafran agitation, he was ready to do more for the struggle.

“This inscription reads: I sacrificed my mother and father to get Biafra. I will sacrifice everything.”

In another tweet under the thread, while reacting to a news platform report about military officers arrested for supporting bandits in Zamfara, Kanu wrote:

“I’ve been telling you this for long: Boko Haram, Fulani Herdsmen & ISWAP have infiltrated the Nigerian Armed Forces.

“And as TY Danjuma had said, if you don’t defend yourselves, you will all die one by one.”