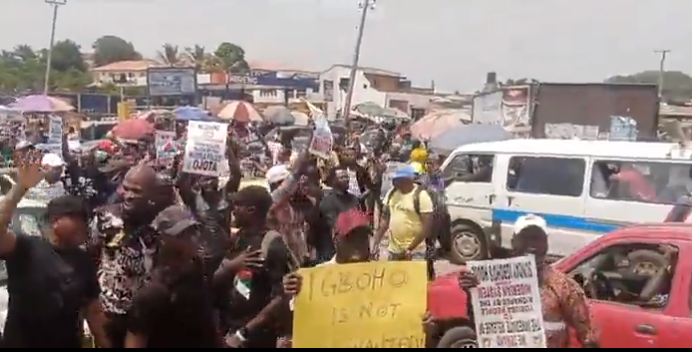 Supporters of the self-acclaimed Yoruba freedom fighter, Sunday Adeyemo aka Sunday Igboho, on Wednesday, took over the streets of Ibadan, Oyo State, to protest last Thursday’s raid on the activist’s residence by the Department of State Services (DSS).

The protesters gathered in front of Igboho’s house in the Soka area of the Oyo State capital and later took to the streets around noon.

The protesters chanted various songs including “No retreat, no surrender!,” “Oodua Nation!,” and “Sunday Igboho is not a criminal!,” amongst others

A leader of the group, who didn’t disclose his name, addressed the protesters before they took to the streets.

He said the group would march to the palace of the Olubadan of Ibadanland, Oba Saliu Adetunji, and proceeds from there to the Government House, amongst other places.

“We want them to bring the killers of Adogan and Alfa to book. The government must pay the N500 million damages demanded by Igboho’s lawyer for the destruction of his house and property during the invasion. We want the Obas to make this happen within seven days.”

DSS had in the early morning of July 1 invaded Igboho’s residence and recovered seven AK-47 rifles and 5000 rounds of ammunition, among others from the building.

13 supporters of the activist were arrested for allegedly attacking the security operatives during the raid.

Nigerian govt to commence process for review of Copyright Act