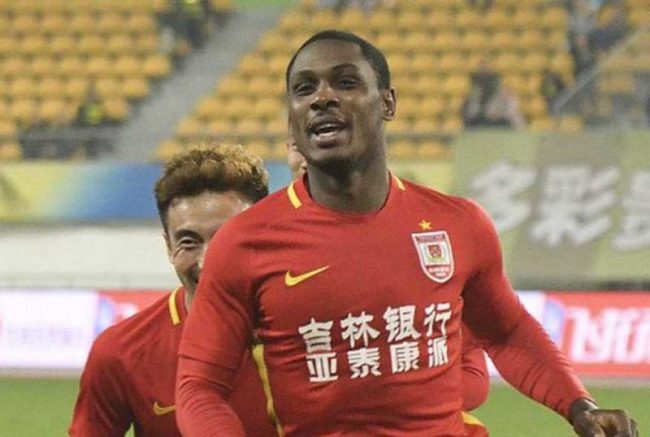 Super Eagles striker, Odion Ighalo continued with his brilliant form in front of goal as he bagged a brace for Changchun Yatai in their 3-3 draw at Tianjin Teda on Saturday.

A last-minute equaliser denied a revenge for the visitors, who had lost 1-0 at home in the reverse fixture earlier this season.

In the Chinese Super League clash played at the Tianjin Tuanbo Soccer Stadium, Ighalo scored the opening goal and the third for his side against the hosts who were without John Mikel Obi.

Yan Zhiyu was the other goalscorer for Changchun Yatai, while Jonathan da Silva scored a brace for the hosts and a late goal by Ghanaian forward, Frank Acheampong, rescued for them a point.

Changchun Yatai currently occupy 10th position in the table with 30 points from 25 games, while Tiajin Teda are two points adrift in 12th position with 28 points from the same number of games.

Ighalo, who is expected to feature for the Super Eagles when they face Libya in an AFCON qualifier doubleheader during the international break, is just a goal behind the leading scorer in the Chinese Super League.