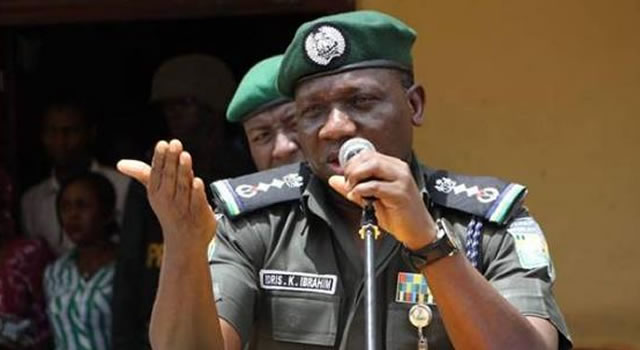 The Inspector-General of the Nigerian police force, Idris Kpotun Ibrahim, is a man whose official state responsibility is as challenging as hell. Policing a vast country like Nigeria with a population of over three hundred million souls remains a daunting task indeed. With crimes associated with the digital revolution invading our federal space and criminals of different hue devising new strategies to beat the security network Idris and his men have their hands full of security issues and matters arising. When Idris rose to the top as Inspector-General there were rumours of favouritism in certain quarters. He may have been qualified for the top job given his professional experience but critics had alleged that he must have been so promoted unmeritedly in compensation for his role in the ‘landslide’ victory of the APC in Kano state where he was the then Commissioner of Police.

IG Idris is known to have passed through both the Ahmadu Bello University, Zaria, and the University of Maiduguri in Borno state before rising steeply to his present position as the chief law enforcer in the country. So academically speaking (though a glorified product of the aberrant quota system) he cannot be described as a misfit, a man of modest education or worse still, barely educated. In Nigeria the police force is about the most corrupt institution in the entire country!

Much as we recognise, as a matter of indisputable fact, that Idris did not create the rot in the police system we hold that he has contributed in no small meaure to the deterioration of the service. There are a whole lot of bad eggs in the system whose only professional pre-occupation seems to be a mischievous hobby of denting further the already dented image of the force. Poorly remunerated and motivated the average Nigerian police officer cuts the image of pity and banditry. They could easily vent their frustration on the hapless citizens toiling day and night to make ends meet in a rich abused society. SARS, for example, had killed more Nigerians extra-judicially than armed robbers or even Fulani herdsmen! They seem to compete with Boko Haram in terms of crude terrorism against the unarmed population! And with criminal impunity too!

Before Idris we have had Inspectors-General with tainted records of service. Mike Okiro, former IG and now Chairman of the Police Service Commission (PSC) had been accused in the past of corrupt practices. He was alleged to have used a firm registered by his now late wife to defraud a bank! In 2009, the Nigerian Deposit Insurance Corporation (NDIC) had indicted Okiro and his wife, Hera Okiro, for engaging in activities that led to huge losses for creditor banks. Other allegations of corrupt enrichment, secret deals and unprofessional conducts are legion.

The Independent Corrupt Practices and Other Related Offences Commission (ICPC) is still in the process of prosecuting ex-IGP Sunday Ehindero for alleged N16 billion fraud! Alongside a former Police Commissioner, John Obaniyi, they were docked before an Abuja High Court for alleged misuse of over N578 million donated to the Police by the Bayelsa State Government for the purchase of arms. Scandals abound but we can only mention these two for now.

The current Inspector-General is as controversial as none of his predecessors. Recently he had a spat with the Senate over his refusal to appear before the Senators who had summoned him to appear to defend the government’s policy over the insecurity in Benue state and elsewhere up north where the Fulani herdsmen were busy spilling blood of the innocent and committing arson, rape and forcing thousands to flee their ancestral lands. Instead of heeding the call for him to present himself on two occasions Idris adamazntly sent in a senior police officer to represent him. The Senate President, Bukola Saraki, had to take the matter to the President reporting the arrogance and lack of respect of the number one cop towards the parliamentarians. The Senate had on May 9, passed a vote of no confidence on the IGP, describing him as an “enemy of democracy” for failing to honour its invitations twice.

Before then we were treated late last year to a lewd allegation of sexual proportions involving Idris and his many mistresses. The Senator representing Bauchi Central Senatorial District, Hamman Misau, had opened a can of worms against the IGP. Senator Misau, a retired police man, had alleged before a Senate plenary that Idris was in sexual relationship with two female serving Police officers; that is, one Amina and Esther. According to him he had impregnated Amina and did a wedding secretly in Kaduna! Inspite of the mounting security challenges facing the police force it is surprising that IG Idris still could find blissful time for some extra-marital romance!

IG Idris was in Kano early last week for the inauguration of the Police Technical Intelligence Unit. There, before thousands of invitees, the Inpector-General was delivering a prepared speech. According to some online reports he stumbled in the course of his presentation as he got stuck in-between the lines. He sounded incoherent, uncomposed and repetitive apologising profusely for his inability to correctly pronounce certain words. Even the timely assistance provided by his aide could not help Idris to surmount the legibility ‘mountain’ before him! On this occasion even arms could not play any role in ‘defeating’ a white-collar ‘opponent’ standing defiantly before a police chief! Sometimes scholarship could be a thing to be taken seriously.

A hard look at the trending video online showed Idris in his worst moment of uneasiness, humbled by a daunting lack of lucidity; he appeared as if he was under the influence of a substance: alcohol, drug or whatever! The video online had since gone viral attracting derision from a section of Nigerian social media addicts with others charging Idris of incompetence. His betrayal of the spirit of academicism may go beyond being competent or not.

For some conspiracy theorists Idris may have been a victim of a “juju” attack from his many detractors in order for him to be exposed to national (and even international) ridicule. And for some uncharitable ones a remote-controlled spell must have been administered on the police boss from afar!

However, Idris, in our reckoning, was not a victim of any evil manipulation from any enemy quarters. Rather, he had simply exposed his lack of sophistication, articulation and charisma. He belongs to the ‘analogue’ generation in power imposing their will on a digital generation! We blame him not but the archaic system that always succeeded in recycling themselves for political dominion.

During the ill-fated Ibrahim Babangida tyranny in the late 80’s and early 90’s the late Lawrence Anini was a notorious armed robber in Benin city. Then, Etim Inyang was the Inspector-General of the police. The police high command he led were unable to lay their hands on Anini for months prompting Gen. Babangida to ask Inyang menacingly during a state council meeting where Anini was. IG Etim bowed and trembled before the crafty dictator muttering in response that his men were still tracking the munificent dare-devil bandit. Anini was later caught and tried and executed to the collective relief of the terrorized ‘Bendelites’.

It was later discovered as the late Anini, Monday Osunbor and co stood trial in a High court in Benin city that the gang had evaded arrest all along because a senior police officer (George Iyamu) was a paid agent who supplied them with both sophisticated weapons and valued information that enriched their criminal network. The federal police force as presently constituted and headed by Idris is rotten and broken! There are still out there a lot of Iyamus.

Beyond IGP Idris’s ‘transmission’ drama in Kano the police in Nigeria is overdue for fundamental reform. And to start with the force must be unbundled (decentralized) with the establishment of the state police commands across the federation. Idris may not be able to confess to his lack of professional capacity to lead an inefficient corrupt force for obvious reasons. But we want to see the creation of state police as an important electoral campaign issue in the coming presidential poll of next year.

The President Nigerians must vote to power must be one capable of committing himself and his administration towards the constitutional establishment of the state police. We believe strongly that Omoyele Sowore remains the best choice in this regard. We use this opportunity to welcome him back again to the country he loves.