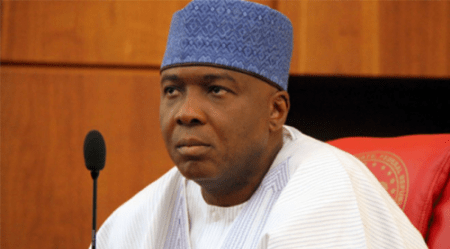 President of the Senate, Bukola Saraki, has cried out over an alleged plan by the Inspector-General of Police (IGP), Mr. Ibrahim Idris, to implicate him.

Saraki said some cultists who were arrested in Kwara State, have been ordered by the IGP that the suspects be transferred to Abuja, where they are expected to make statements that will implicate him.

Saraki said people in authority are abusing power and want to use their positions to fight their perceived enemies.

Speaking during the Senate plenary on Wednesday, Saraki narrated how he learnt of the alleged plot to his colleagues.

“My Distinguished colleagues, there is an issue which I need to bring to your attention very urgently. Last night, my State Governor, Dr. Abdulfatai Ahmed revealed to me an information at his disposal that a group of suspects who had been in police cells for several weeks for cultism and whose investigation had been concluded with prosecution about to commence under the State law based on the advice of the Director of Public Prosecution (DPP) and the Ministry of Justice were ordered to be transferred to Abuja this morning.

“According to the information available to the Governor, the Inspector General of Police, Mr. Idris Ibrahim directed the Commissioner of Police in Kwara State to immediately transfer the men to the Force Headquarters. The plan, as the Governor was made to understand is that, under duress, the suspects would be made to alter the statements they already made in Ilorin. They will then be made to implicate the Kwara State Government, and in particular, myself, in their new statement.

“This plot is part of the strategy by the IGP Idris to settle scores over the declaration by this honourable Chamber that he is not qualified and competent to hold any public office, within and outside the country and that he is an enemy of Nigerian democracy based on his usual disrespectful conduct towards lawful authorities.

“”In my own view, this plot is an act of desperation, blackmail, intimidation, abuse of office and crude tactics aimed at turning our country into a Police State where top officials cannot be made to obey the law, follow due process and subject themselves to constituted authorities.

“I want to bring this dangerous development to the attention of all of you my colleagues, the entire country and the international community so that you can be aware of the level of impunity in our country and the danger it constitutes to our democracy,” the President of the Senate said.

Saraki explained that he was bringing the issue to the attention of his colleagues to let them know the gravity of the situation.

“I know the gravity of the issue that is why I am bringing it to your attention and to continue to let our colleagues and the world know presently the danger we are going with and the levels of the rascality that is going on with some of these actions. I have brought it to your attention and we must continue to play our own role in doing what we believe in the course of our duty.

“It is very unfortunate but that is the information I have as of now,” the President of the Senate said.